Why the Evernote Widget for Android is a Must-Have

Why the Evernote Widget for Android is a Must-Have

Over the last year, Evernote has become my choice method for taking notes in conference workshops and webinars (the ones in which I am a participant rather than the presenter). While some phone calls and meetings call for brainstorming on paper, the results of that brainstorming gets cleaned up and stored in Evernote.

But what about the short interactions in the hallway? Do I take notes from that interaction in Evernote, or do I jot it on the paper memo pad that is always in my pocket. What about the photo of a page in a book containing information I want to later research? Do I take a photo with my camera and hope I remember to retrieve it, or do I take the picture with Evernote’s document camera, where the image sitting in my Evernote Inbox serves as its own reminder that something needs to be done with it? Much of the answer has to do with how easy it is to create a new note (and of the correct variety) in Evernote and with how few taps.

The newest version of Evernote requires at least two taps to create a new note: one to open the app and a second to tap the “+” to create the note. Not bad. However, if that note is go to require the camera or microphone, an additional tap or two is required. That may be a deal-breaker, especially when you are trying be attentive to the conversation in which you are a part.

What if one tap would open Evernote, create a new note, and that note be exactly the kind of note? That’s exactly what Evernote widget does. Below are three screen shots screenshot from my phone. On the left is my home screen. You see the Evernote app in the bottom row. You also see two, green icons just below the task widget. The one on the left creates a new note…with one tap. The one on the right creates a new voice dictation note, also with one tap. (With the voice dictation note, I can speak, and the results of what I say is transcribed into text.) When I installed those two copies of the widget, I was able to set what type of note each of them would produce. 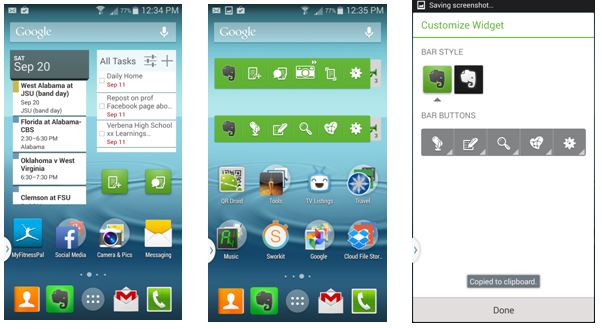 Once swipe to the right reveals the middle screen you see directly above. Here you see two copies of a slightly different Evernote widget. From left to right, the top row allows me to do the following:


The icons on the second row, from left to right, allow me to do the following:

When I tap the “Settings” icon (the cog), the image on the far right is where I decide the function of each button on the bar.

During daily use, I am at most a swipe and a tap from created any type of note in Evernote. For a digital tool to be effective for trapping information “on the fly,” it’s got to be quicker and easier than the memo pad in your pocket. Moving from four taps to one may not seem like much. In the heat of the battle, it’s everything.

Evernote: How to Keep Up With Those Important Interactions

Evernote Use Case: The Kitchen Renovation