When you or I question a practice that seems to defy logic, the answer is likely to be, “That’s the way we’ve always done it.” The response shifts whatever blame there may be to some unnamed person at some unnamed time in the past. The response also indicates no thinking is going to go into whether or not what has been done in the past is the best course for the future. 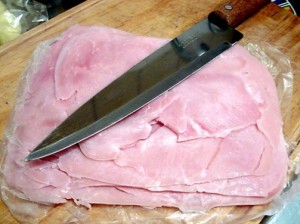 At best, “That’s the way we’ve always done it” is only partially true. Consider the story of the young girl helping her mother prepare Easter dinner.

Before placing the ham in the oven for baking, the mother cut off both ends. “Why did you cut off the ends of the ham?” asked the daughter.

“That’s the way my mother always did it,” was the reply.

As fate would have it, the next week brought about a visit from great-grandmother. Overcome with curiosity, as young children often are, nothing would do but to pose this same question.

“Yes, indeed, my child, I always cut the end off the ham” replied the elderly woman.

“But why?” asked the young girl.

Holding her hands about 12 inches apart, she replied, “Because my pan was only this big.”

Decades ago, Great Grandmother was confronted with a set of circumstances. Her pan was not large enough to accommodate the ham. She came up with procedures to handle those circumstances. She did the best she could with what she had.

What if we were to confront today’s challenges the way Great Grandmother in the story confronted hers? What is we did the best we could with what we have? What we have keeps getting better, meaning what was “best” back then is far from “best” by today’s standards.

What if we re-framed “that’s the way we’ve always done it” to embody a standard of quality rather than a particular act? I imagine we would spend more time challenging outdated practices, more time learning the tools at our disposal, and less time carrying on with practices which worked in a bygone era.

If we look to the past for examples of doing the best they could with what they had, we also throw down the gauntlet to generations to come. We issue the challenge not to mindlessly carry on as we did, but to build on our accomplishments.

Our circumstances change. Our procedures must change with them. Our ancestors understood that. Do we?