Why is The Web Clipper Not Saving to My Default Evernote Notebook?

Why is The Web Clipper Not Saving to My Default Evernote Notebook?

This video illustrates features of the new Evernote Web clipper for Chrome. I did notice a problem that for me was significant. Take a look at the video, and then we will discuss the problem.

One of my key principle in using Evernote is having a default notebook. Unless I tell Evernote otherwise, anything I add to Evernote is to go in that default notebook. This practice lets me look in one place and see the items I have recently added. Many items in Evernote are simply reference material. I will then move those items to their proper notebooks.

Other items, however, are added to Evernote to serve as a reminder of something I need to do. If I am in a store and see a potential gift to buy, I might take a photo and add some supporting information to it in Evernote. I don’t have to remember that photo and retrieve it later from the others photos in my phone. All of the new notes are in one place, my default notebook. I look in that one place and take needed actions on what is there.

My default notebook is called “.Inbox.” Notice the punctuation in front of the word. Since Evernote alphabetizes the list of notebooks, using a punctuation as the first character causes that notebook to sort to the top of the list.

The problem is with the web clipper was that notes being added via the web clipper were not ending up in the default notebook. In essence, the notes were as good as lost. After doing some searching, I found the answer, and it boiled down to un-checking one box. 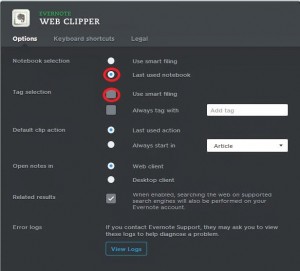