When Your Note Taking System is “I Don’t Have One”

When Your Note Taking System is “I Don’t Have One” 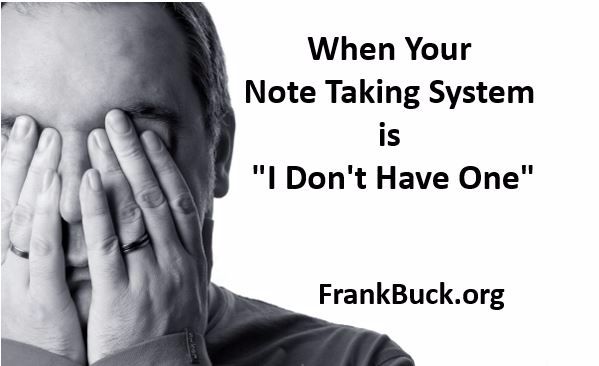 This post is the third in a series about developing a note taking system. The first post shows what worked for me as a college student. The second post explores organizing academic notes, and takes into account the digital resources with which students contend and the opportunities digital devices offer. In this post, we move from the world of academia to the world of work.

What’s Different in the Adult World?

In school, we knew when the bell rang, note taking was likely to begin. In fact, having our notebooks open when the tardy bell rang was a teacher expectation in many classes. During the class, taking notes may well have been the major way in which you participated in that class. While you may have answered a question aloud here or there, your role was generally passive. Your job was to take notes. The contents of those notes would help you prepare for the test.

In the adult world, our days include phone calls, meetings, and one-on-one conferences. Our roles in those scenarios are more active than what we experienced in our academic classes. You are upholding your end of the phone conversation and offering your input in the meeting. It’s also harder to tell what information you will need later. There is no teacher to tell you what to write down or what’s going to be on the test.

In the adult world, the “test” can come at any time. Unlike school, you can use your notes…provided the notes you have are any good.

In teacher education classes, we were told that documentation would be important when we started our careers as teachers. It would be especially important to document our interactions with parents. The trouble was that nobody ever gave us a good way to go about documentation.

My Note Taking System Was…I Didn’t Have One

Not so. I tried different things. In the process, I found what didn’t work. I tried typing up notes from phone calls or conferences with parents. Yes, those were the days when the typewriter was very much in its heyday.

The trouble was, trying to remember what conversations had taken place during the day was difficult, and trying to remember the details was even more difficult. The entire process was too time consuming. Most important of all, I never really needed those notes.

I did what so many people do…I stopped documenting. I had better uses for my time than to type up a record of every phone call or conference.

I tried composing a form on small slips of paper. I would take notes on those slips and then file them. That way, every conversation with Mrs. Jones would be filed together. Good idea, but keeping up with it proved futile. Filing the slips was cumbersome. As time went on and the number of slips grew, the task of alphabetical filing grew even more cumbersome. Again, I rarely needed to refer to those little slips.

So, I did what many people do…I stopped documenting once again.

You Don’t Need It Until You Need It

People do what works. That’s what has helped our species survive. When the time crunch hits and you never need those notes, taking notes grinds to a halt. And then it happens…that one conversation where you thought the issue had been settled.

Three weeks later, the other party is sitting in your boss’s office, and you are the topic of conversation. The other person presents a side of the story far different from your recollection. The 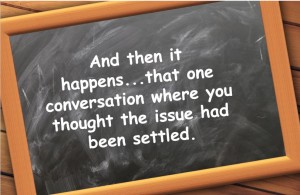 only problem is that by now, your recollection is none too good. What was said and what was promised are very hazy. It’s hard to refute what is being said. If only you had documented that one.

You never know which one of those interactions is going to come back to haunt you. What you and I need is a system for documentation that is so easy we will do it not for a day or a week or even a year, but for a lifetime.

I didn’t have a system like that. Most people don’t. If you are one who doesn’t, don’t feel bad. You are part of a very large club.

In the next post, you are going to read about a system that is so simple you might actually use it. But it doesn’t stop there. Other posts to follow will give you other methods. Some of us like to organize digitally. Others like pencil and paper. Regardless of your preference, you are going to get something you can use.

My suggestion is to continue to read the posts in this series. Think about the pros and cons of what you read as it relates to your own situation. Wait for the next post and do the same thing. When the series ends, make your plan as to how you will take notes. You can become a master notetaker! It’s not hard. You just need a good system.