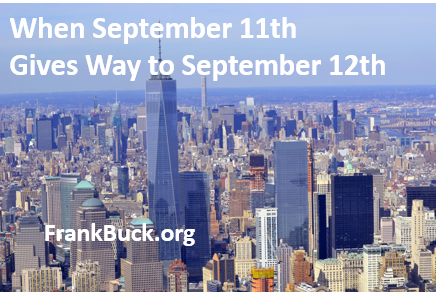 Every generation has those few moments forever burned in its collective memory. Details that would ordinarily have been forgotten are recounted decades later as if they had happened mere moments before. My parents and their friends can recall the particulars of when they learned of the attack on Pearl Habor. People only a few years older than me talk of where they were when they heard President Kennedy had been shot. Those in their early 20s and up recall where they were and what they were doing when they heard a second plane struck one of the Twin Towers.

I was a principal and had just finished a phone call from a parent who told me about the first plane. I walked into the library and looked up at a television just in time to see the second plane strike the second tower. Trying to conduct a “normal day of school” on a day that so far removed from normal presented its own set of challenges.

By the time I left from work, rumors had already spread that gasoline would be scarce, and so I added to the problem by adding one more car trying to get into the already crowded parking lot at a neighborhood station. On that day, there were so many questions, so few answers, and a fear that the worst might still be to come.

September 12th was the day when America demonstrated the worst things are never the last things.

“The worst things are never the last things.”

Over a decade before the attack, I was in church on a Sunday morning nearing Easter. One particular sentence in the sermon stood out: “The worst things are never the last things.” the point being made was that the horror of Good Friday is followed by the celebration of Easter.

In that sermon, John Claypool went on to recount the final days of Sir Winston Churchill :

In June of 1965, he was asked to give a commencement address at a university in Great Britain. By this time, the great statesman was badly infirmed. In fact, he was within months of his own death. He had to be helped to the podium that day, and stood there saying nothing for what seemed like an interminable period. But then, that amazing voice that had once called Britain back from the brink, sounded for the last time in public, and what he said was, “Never, never give up! Never give up!” Then he turned and went back to his seat. There was moment of stunned silence, and then everyone rose to his or her feet in admiring applause. They say it is the only commencement address in history to be remembered verbatim by everyone who heard it. What was so powerful about it was that the words were so congruent with the one who said them. Again and again, Churchill’s career had been pronounced dead, but he kept coming back. Why? Because he, too, had caught the gleam that Buechner sensed in the pages of Holy Scripture that the worst things are never the last things.

The account of Churchill’s funeral at St. Paul’s Cathedral confirms this fact. He had carefully planned it himself and included in it some of the great hymns of the Church and all of the wonder of our Anglican liturgy. Furthermore, there were two things that he specifically requested at the end that made it unforgettable for every person there. When the benediction had been said from the high altar, silence fell over the packed Cathedral. A bugler high up in the dome of St. Paul’s had been asked to play the familiar sound of “Taps,” a well-known signal marking the end of something. Those haunting notes brought home to everyone there the realization that an era had come to an end, and it was reported that there was hardly a dry eye in the church. However, as Churchill had requested, after the notes of “Taps” had sounded, another bugler on the other side of the dome, began to play “Reveille.” “Its time to get up, it’s time to get up, it’s time to get up in the morning.” That final touch caught everyone by surprise, but revealed where Churchill had gotten the strength across the years to never give up. He did believe that the worst things are never the last things and the final sounds of history will not be “Taps” but “Reveille.”

Following the events of September 11th, Dr. Claypool delivered that iconic sermon to a church in Atlanta, Georgia. You can experience that sermon here.

If September 11th revealed the vulnerability of America, September 12th revealed the resolve of Americans. It was the day a nation responded with “Reveille.” If there is a message for each of us, it may be that when we face what seems to be the worst, when it seems we face our own personal “September 11th,” we have before us two ways to respond. When we feel like blowing “Taps” over the whole thing, dawn brings a new day and a new perspective. It can be the day we respond with “Reveille” and demonstrate as Buechner, Claypool, Churchill, and the United States did that the worst things are never the last things.

Are You Doing Your Part?