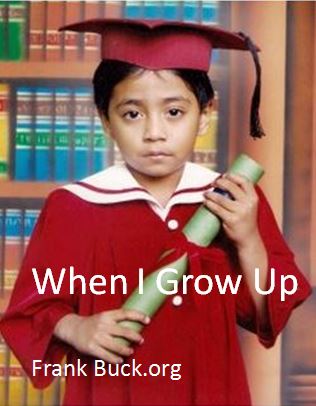 During my years as an elementary school principal, one of the parts of the spring “Awards Day” ceremony was Kindergarten Graduation. Days before the event, the kindergarten teachers asked each student what they wanted to be when they grew up and why. The emphasis was on the why.

I could stop there, and it might well provide someone with an idea to add to his or her own end-of-year activity. The real purpose of this post is to tell you what happened six years later.

You see, each year I would save the script from Awards Day. My 7th year as principal at that school, the first class of kindergarteners was now the 6th-grader class, the upper grade in our school. Before the last Awards Day for them, we would practice their part of the program. As we completed that practice, I would mention very casually, “Some of you have been with us for a very long time…every since kindergarten.” Nobody had a clue what was about to happen.

I turned to a student and said, “Do you remember walking across this very stage as I said, ‘When I grow up, I want to be a…..’?” I would read from the script saved from six years before! Then I would mention another student and do the same thing. By the third student, they knew what was happening. We went through each one of them, what they said they wanted to be, and why.

I want to be a policeman…

We all look for neat traditions that don’t put a great deal of stress and strain on our already full agendas. Saving those Awards Day scripts was easy. It’s something anybody can do. Reading these kindergarten memories helped students realize how far they had come. It also provides a clue for how much growth the next half-dozen years will bring.

Does your school have a neat end-of-year transition? Share what you do in the blog comments.