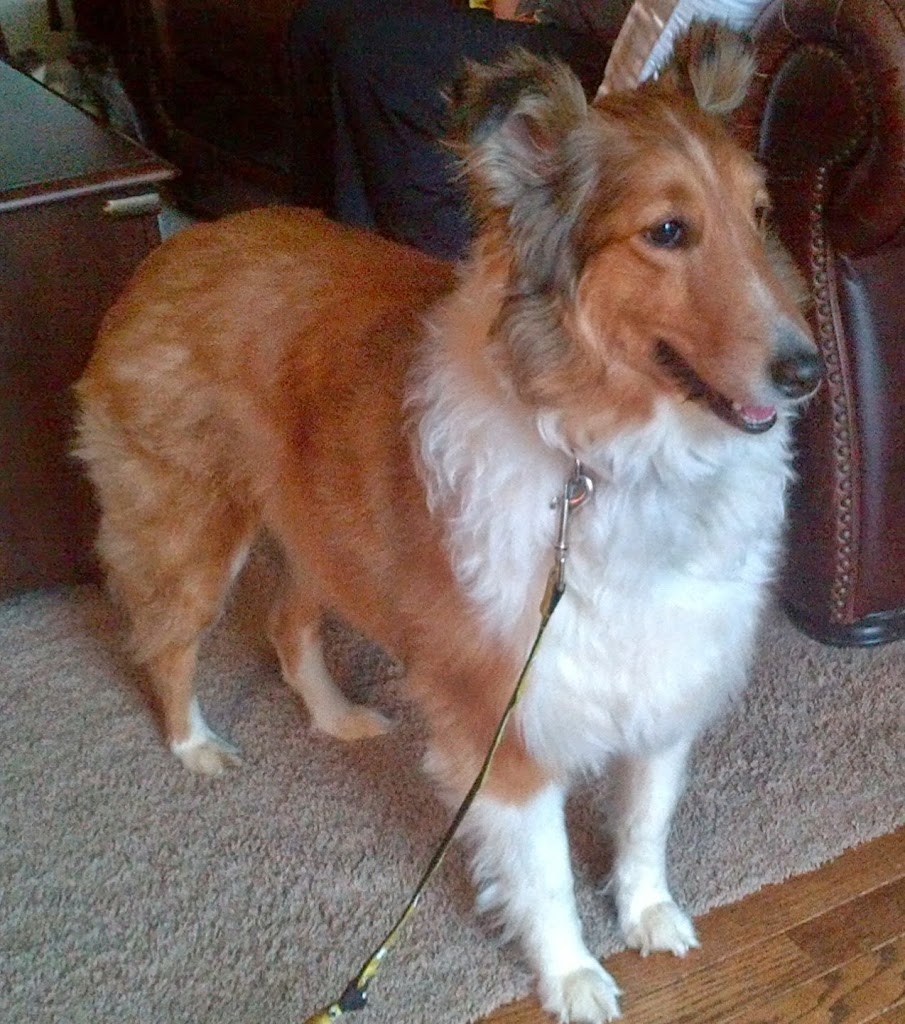 The last post introduced readers to Sally, the 4-year-old Sheltie we adopted Friday from the Sheltie Rescue of East Tennessee. Ironically, as we were making the five-hour drive from Tennessee back home with Sally, another blogger was writing about his five-hour trip back to Tennessee with his new dog.

Michael Hyatt’s blog is one of my favorites. In his post this past Friday, Hyatt talked about the conversation he had with the dog’s trainer.

“What happens if he has an accident and eliminates indoors. How should we respond?”

“No problem,” replied the trainer. “Just take a newspaper and roll it up real tight—like it’s a stick. Now hit yourself on the forehead and say, “Bad owner!”

She went on to explain, “If he has an accident, it’s your fault. Either you got distracted or ignored the signals.” She continued “Charlie’s trained. Now we just have to train you.” That last statement, together with my experience with Sally at that Thursday-night class, caused me to reflect.

A Flashback
Twenty-four years ago, my wife and I acquired our first Sheltie, an 8-week-old puppy we named “Lassie.” Sometime before her first birthday, we enrolled her in Saturday-morning classes at the “Dick Lovelady School for Dogs,” located near our home. Dick’s experience with training dogs dated back to World War II, but it became evident from the beginning that these lessons would have much more to do with training the owner then with training the dog.

We learned that training Lassie meant devoting some time each day to reinforce what she had learned and add just a little more. Small, logical steps was the only way to go.

Dick practiced what he preached. Birmingham’s Summerfest Theatre was preparing a production of Annie. Dick was hired to handle all aspects of the character “Sandy,” the dog. Dick was to secure a dog, train the dog, attend rehearsals with the dog, and be just off-stage during performances.

Dick went to a local animal shelter and rescued a dog that looked the part. From “square one,” he began training “Sandy,” all done with hand signals. During the performances, Dick was just off-stage, directing Sandy’s every move. The audience watched as Sandy would trot on-stage at just the right moment, sit, lie down, speak, exit the stage, and other tricks. The entire time, Sandy was keeping a close eye on Dick and his hand cues.

Sandy was the star of the show. After the production ended its final performance, Dick was approached by a number of people, all with the same question: “How much will you take for Sandy?”

The reply was always the same, “Sandy is not for sale.”

Wealthy individuals, who wanted Sandy as a pet for their children, begged Dick to reconsider. They were willing to pay a handsome sums for this well-trained dog.

You see, four months earlier, they could have had this dog for a song. Who knows how many people walked right past this adorable dog at the animal shelter with no consideration given for adoption. Who knows how many other dogs, also in that same facility, were capable of “stardom” if the right person had come along and knew how to unleash their potential?

The Clicker
When Lassie died a dozen years later, we adopted Bonnie, our first rescue. We began classes at the Birmingham Obedience Training Club, where she and I were introduced to the concept of “clicker training.” The process started by clicking the clicker and giving Bonnie a treat…repeated over and over again. The point was that she would come to associate hearing the click with the prospect of a treat to follow.

I thought it was the most ridiculous idea I had ever heard…until I saw it starting to work. At first, Bonnie was scared of the sound the clicker made. After a few treats, that sounds became music to her ears.

The hardest part was to train me. Being late with the clicker would confuse her on what behavior was being rewarded. Expecting the “finished product” in the early stages of learning a trick was setting us both up for failure. Extending a training session past he length of her attention span was an exercise in frustration for both of us.

What Did I Learn?
What works with our dogs spills over into so many areas of life:

We are beginning our journey with Sally. She is quickly proving to be well-mannered, loving companion to me, Davonia, and Cabrio (our other Sheltie). We hope that she is as pleased with her forever home as we are with her.

Sally (the taller Sable) is pictured here playing with her friend, Shiloah, at the rescue
Share this post
Previous
Next