Voicemail: How to Make Your Outgoing Message Helpful

Voicemail: How to Make Your Outgoing Message Helpful 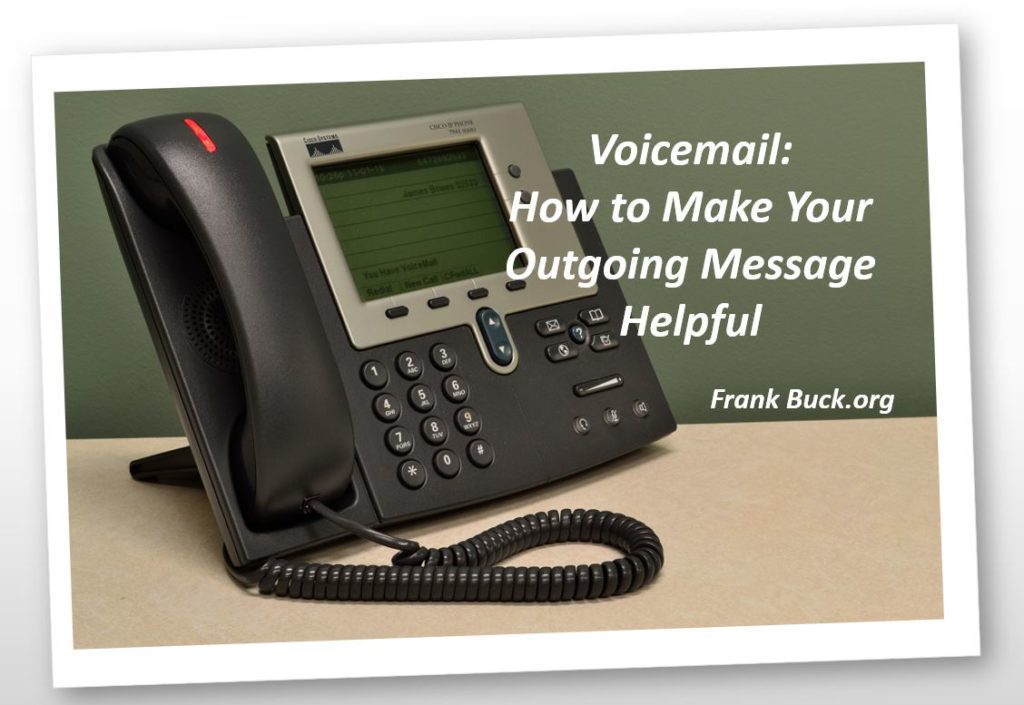 Call the average business. If you get voicemail, you can pretty much predict word-for-word what you’ll hear.

“Hi, this is Joe. Leave me your name and number and I’ll…” You know what’s coming next, right? “I’ll call you back as soon as possible.” We hear it so often it makes no impact. Many of us are guilty of the same thing. We don’t know there’s any other way.

Exactly what does “as soon as possible” mean? For some people, they might as well say, “I’ll call you back eventually…unless I forget.” The caller is thinking the phone is going to ring any second. The reality is the other person won’t be in the office for the next three days. When they get back, they’ll be so overwhelmed you’ll be lucky to ever get a return call.

What if it was helpful?

My friend Gene Ramsay is an insurance agent in Birmingham. If you get his voicemail, his message includes, “Set your watch. I’ll do my best to call you back within the hour.” And he does.

As a school administrator, I handled phone calls in one batch after students had gone for the day. If callers got my voicemail, they heard, “…I return calls between 3:30 and 4:00 in the afternoon. Please leave your name, number, and a detailed message so that I can prepare for our call.” This message communicates several things:

I was reaching the point of frustration when trying to reach a particular central office administrator in a large school system. To reach her, you first had to reach her department and then be transferred to her private extension. The problem was, I could never get anybody to answer that department’s main number. To make matters worse, the outgoing message was, “The person at extension…BLAH BLAH BLAH… is unavailable.” Can we not even take the time to record a message that lets me know I reached the right place?

When I finally reached the administrator, she provided an explanation, “We’re so short-handed around here. During the day, we’re all in the schools, including the person who would be answering the main number.”

I asked her what would happen if people got a message something like this: “Thank you for calling Special Education. During the day, we try to spend our time in schools with the children. If you’re getting this message during school hours, that’s where we are. When we get back this afternoon, we’ll return your call.”

It would have told people something about what that department valued. It would also have let callers know what to expect. It would have done all of that with much more specificity than “…as soon as possible.”

Recording the message is half the battle. People have a much better idea of what to expect. Doing what you say you’re going to do is the other half. If you say you’ll call back within the hour, do it. If you say you return calls within 24 hours, put that in the message. Then, deliver on it.

It’s time to get rid of the meaningless “…as soon as possible.” Replace it with a message that’s helpful.

Do you have an outgoing voicemail greeting you want to share? What about one you have run across that’s helpful? Let me know in the comments.

Ask for What You Want

What You Need to Know About Setting Email Expectations