Tonal Energy, A Bargain for the Band Student

Tonal Energy, A Bargain for the Band Student

Before entering the world of school administration, my background was as a junior high and middle school band director . I also hold a degree in flute performance. Both as a director and as a player, good intonation is a critical, yet often elusive element of musicianship. 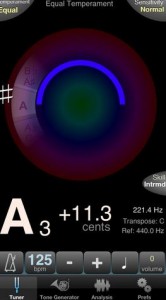 As a student, our bandroom had a “Strobotuner.” One student could play one pitch, and the machine would register whether that pitch was sharp, flat, or in tune. If a player wanted to tune a different note, stopping and changing the dial was required. Another machine, known as a “Stroboconn” featured 12 different readouts, one for each note of the chromatic scale. A player could play an entire scale, or any portion of a piece of music, and see the results of each note. The downside was the cost of a Stroboconn was upwards of $1,000.

Technology gets better, and as a young director, I was able to purchase a tuner small enough to throw in my briefcase. This tuner had the same capability as the Stroboconn. A single student could play a scale or passage and receive instant feedback as to whether each note was sharp, flat, or in tune. The degree of sharpness or flatness was also displayed. The tuner cost me around $100 back in 1982.

Technology has gotten far better. The video below demonstrates an app called “Tonal Energy.” It is available for iPad and iPhone. It does what the $1,000 Stroboconn did. It actually does more: it will generate a tone, and has a built-in metronome.

The price for the app is $3.99. Given how common iPhones are in the hands of students and the app’s rock-bottom price, the landscape has changed. No longer is the student limited to playing one note in front of the single Strobotuner in the band room, and having to share that tuner with a host of other people. Every student who owns an iPhone can have this app and use it on a daily basis during home practice.

This post is written for a couple of groups of people. The first is my friends in the band world who are looking for ways to improve intonation in their groups. They are aware of the challenges, yet may not know about this particular app. The second group for whom this post is written are the readers of this blog who are band students or parents of band students. Intonation is important, and to have an app that does what this one does for $3.99 is a steal. Download it today.

Who Puts His Trust…