The 6 Best Reasons You Should Stay With Evernote

The 6 Best Reasons You Should Stay With Evernote 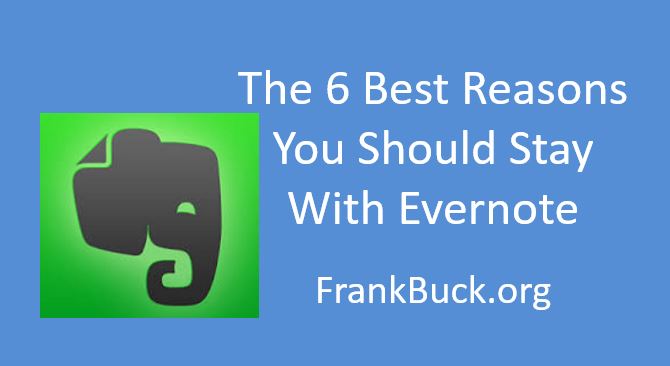 On June 28th 2016, Evernote announced a change in its plans. The price for the paid plans went up. The features available in the free plan went down. Anger abounded. Some talked about leaving Evernote. I seriously considered the same thing.

But after all was said and done, for anyone who had been an Evernote user, their best bet was to stay with Evernote. I wrote this post in August, 2016. Two years later, I have made some minor edits in the wording to keep the post evergreen. The same reasons to stay with Evernote that I listed in I listed in the summer of 2016 are still as valid as fall approaches in 2018.

Here are my top 6 reasons to stay with Evernote:

1. You can get to Evernote from anywhere…still

The June 29th announcement said, “Beginning today, the prices for our Plus and Premium tiers will change for new subscriptions, and access from Evernote Basic accounts will be limited to two devices.” The announcement stated Evernote would send current subscribers a message.

I did receive an email. One statement included very interesting wording: “In 30 days, you will be able to sync your notes to a maximum of 2 devices using Evernote Basic.” [Emphasis added by me.] Notice the subtle difference in the two statements…the word “sync.”

The web version of Evernote does not count as “a device.” If you want to use Evernote for free, you have a simple workaround available. Use the web version (Evernote.com) rather than the desktop client.  You can then use Evernote from an unlimited number of computers! If you are like me, you are using only one mobile phone and one tablet to access Evernote. Let those constitute your “two devices” that will sync to Evernote.

So, if the “two device limit” concerned you, now you know the rest of the story. If you are using the free Evernote plan and like it, keep it. In fact, you could stop reading right here and simply stay with Evernote.

2. Evernote has the best Web Clipper

OneNote, Google Drive, and Google Keep all have Chrome extensions that “clip” websites and automatically send them to the appropriate services. Having tried them, Evernote’s is by far the best. At the end of this post is a link to one I wrote about Evernote’s web clipper. It’s faster than One Drive’s.

Unlike One Drive’s clipper, you can edit the resulting clip. One Drive saves a pdf that may introduce a page break right in the middle of a photo. Another one of the posts in the “For further reading” section” illustrates this point.

Google Keep’s clipper does not click the web article at all. It merely saves a link to the original source.

3. Evernote has a great hierarchy

Google Drive allows for layers of folders. But for the information you want to be able to find quickly, you don’t want information six layers deep. Likewise, Google Keep has no folders whatsoever. All the notes appear in one large display, like a huge refrigerator door.

Evernote has the right middle ground. Notes are organized in notebooks. Notebooks related to the same area can be grouped in “stacks.”

4. Evernote has an even better search

When the parent searches for the “1st grade” tag, all the notes with that tag appear, regardless of the notebook. Searching within the “Bobby” notebook for that tag would yield only Bobby’s 1st-grade information. A search for notes with both the “2nd grade” and “Medical” tags would return the notes tagged with that combination.

To me, the “tag” serves as a notebook divider. My “House” notebook includes tags such as “Kitchen,” “Flooring,” and “Lawn.” OneNote has a similar capability with its “sections.” But Evernote’s ability to search for a tag across all notebooks and stacks makes it unique.

Evernote’s OCR is great. Pictures often contain text. Imagine taking a photo of a PowerPoint slide, the recipe on the side of a soup can, or page in a book. Evernote, even with the free version, will search those images for your desired text.

5. Evernote allows you to combine various media into a single note

With Evernote, you can combine those elements in a single note. Compare that ability to the competitors, and you find another reason to stay with Evernote.

6. Every note has a unique link

I use Remember The Milk as my task manager. Often, when I am doing a task, there is information I want to have at hand. I can enter text in the note section of that task. But, often the information I am going to need is located in Evernote.

On the web version of Evernote, you can click the ellipsis (3 dots) at the top of the note to get the link. On the desktop client, right-click and copy the note to that link. Or, hold the control (Ctrl) key to get a link to the note within the desktop client rather than through the web. Even if I move that note to another notebook, the link remains the same.

It all boils down to one thing…

Before the June 28th announcement, Evernote was a great product. It offered both free and paid accounts. After the announcement, it was all still true. An easy workaround for the “two-device limit” lets you keep a powerful free version.

Experiment with the competitors if you like. I did.

Or, you can save yourself some time and trouble and stay right where you are. Stay with Evernote.

Evernote: How to Keep Up With Those Important Interactions

Evernote Use Case: The Kitchen Renovation