As I read other material on the Internet, I found that syncing Calendar and Contacts was a major question for many people. Google Calendar Sync seemed to be the popular answer.

During the process, I learned about a free program called “Contacts Sync” which syncs Outlook Contacts with Google Contacts. When you add your Gmail account on your PlayBook, as outlined in Tuesday’s post, the Google Contacts then populates the native Contacts on the PlayBook..

I would suggest reading this post which explains the concept. You can then download the Contacts Sync program from here. The download page to which you are taken does not look like much, but it works. 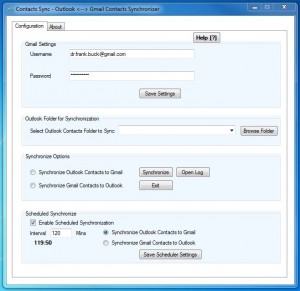 How Did They Do That? The BlackBerry Super Bowl Commercial

Poynt: Pair Your BlackBery and PlayBook

My Favorite Apps for the Blackberry and PlayBook