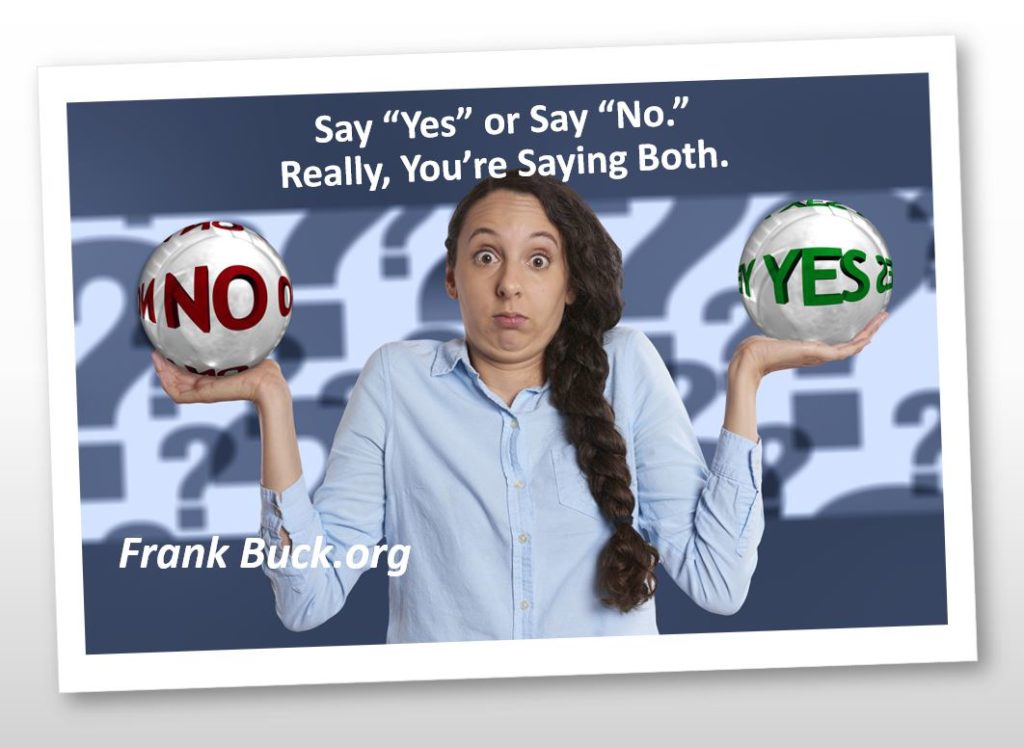 Many of us have been involved in a “helping” profession. Education being a prime example. Our natural tendency is to be helpful, and helpfulness is characterized by saying “yes” to requests. Whether that request is to provide extra help to an individual, serve on a committee, complete whatever paperwork appears, or do all of these at the same time, we are a people who tend to say “yes” first and figure out how we will accomplish it later. After all, doesn’t saying “no” make us seem uninterested, uncaring, and selfish?

In today’s world, the demands generally exceed the available time. The to-do list is never empty. Instead, it’s filled with choices that range from trivial to monumentally rewarding. Saying “yes” to one request ultimately means saying “no” to all else at the moment. Therefore, the question becomes not one of whether we say “yes” or say “no.” Instead, it becomes a matter of which request gets which answer.

Your success partly due by your ability to focus…to give a sufficient amount of time to a task in order to see it to its conclusion. Protect your time by saying “no” so you can say “yes” to the right things.

Why you shouldn’t feel bad when you say “no”

Why is it that when we are saying “yes,” so often we wind up feeling bad? Perhaps the answer is that, at some level, we realize more important responsibilities received a “no.” Consider the veteran teacher approached during instructional time by a well-intending agency representative with the request to compose a memo, and to do so right then. Saying “yes” to this request meant saying “no” to the instruction which should be happening in that classroom. The teacher wrote the memo yet felt bad about having to choose between two poor alternatives—saying “no” to the request or saying “no” to the students.

We need not feel bad about saying “no.” In fact, it is a necessary tool in our bag of time-management tricks. Without the word “no,” our time is never our own. Instead, it’s free for the asking. Those who scream longest and loudest wind up getting more time than they deserve. Those who show up at the door unannounced hijack as much time as they like.

Operating from a to-do list is one of the hallmarks of good time management. It keeps good ideas from being forgotten and keeps obligations from falling through the cracks. But not all tasks are equal. To-do lists tend to grow. In a way, that’s good. It means you get up in the morning with exciting challenges that lead to a richer life. On the other hand, some of what’s on the list isn’t worth doing. Other things can and should be delegated to others so that you can focus on the tasks that only you can accomplish.

As leaders, we help those around us reach their goals by helping them manage their time. Saying “no” is not only OK, it is an absolute necessity if they are ever to accomplish anything of significance. We’ve got to help them understand that. Today, you will encounter opportunities to make the day significant. You will also encounter the trivial disguised in royal garb. Will you be able to distinguish the one from the other? Will you be able to say “no” to the one and “yes” to the other?

Where can you say “no” so that you are better able to say “yes” and focus on something of greater worth?

We’re Not Where We Used to Be (Thank Goodness)

Overcoming Holiday Stress with the Fab 5

The Myth of Multitasking