One of my earliest memories was the funeral of John F. Kennedy. As a junior high school student, I stepped off the bus to news that our governor had been shot and was fighting for his life. As a college student, I was on my way to band practice when I heard that President Reagan was in surgery following an assassination attempt. I was a principal reviewing with our PTO the steps we had taken during that year to make our school safer, and then heard a few minutes later what had happened earlier that day at Columbine. 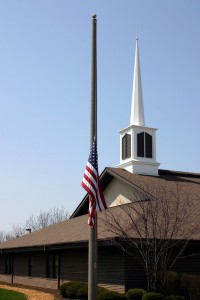 Throughout my life and yours, tragedies have caused our entire nation to pause. However, I can recall nothing to match the horror of young children being murdered in the place where their futures were being molded.

From all reports, Sandy Hook Elementary School had done everything it could reasonably do to keep its students safe from intruders. Yet, on this day, the best plans did not stop evil which has its own careful plans.

Without a doubt, school districts across the country will be re-visiting their own safety plans. Reviewing plans to be sure they are sounds, that people know their responsibilities, and that we practice executing our plans is a good thing. However, I hope that knee-jerk reactions do not result in procedures which turn schools into prisons. And even with the most stringent of procedures, none of us can guarantee  we will be immune from a determined killer.

Can we do a better job of keeping weapons such the one used in this incident out of the hands of people who have absolutely no business with them? According to sources such as MSNNow, the rifle was a semi-automatic weapon first used in the Vietnam War. It has the capability to fire six shots per second. I have a hard time understanding how any civilian would have a need to own this type of weapon.

Can we do a better job of identifying those whose behavior suggests they may be responsible for the next tragedy? It seems on the heels of each mass shooting, people who knew the killer talk of characteristics that probably should have raised red flags.

I wish I had answers to those questions. What I do know is that there were heroes at Sandy Hook Elementary School. The principal, one of those who died that day, had been vigilant about safety. Even her Twitter account shows this evidence.

Teachers took swift and appropriate actions to protect their students, including standing between students and bullets. Had it not been for the actions of the staff, this tragedy could have been so much worse.
President Obama said, “There’s not a parent in America who doesn’t feel the same overwhelming grief that I do…Whether it’s an elementary school in Newtown or a shopping mall in Oregon or a temple in Wisconsin or a movie theater in Aurora or a street corner in Chicago, these neighborhoods are our neighborhoods and these children are our children.”
Each time our nation is rocked by one of these killings, we ask the question, “Will this one be the last one?” I pray the answer be “yes.”
Share this post
Previous
Next