I have been a fan of Google’s translation tools for some time. One of the abilities built into Google Drive includes spreadsheet formulas which will allow you to enter a word into one cell and view its translation in another cell. More importantly, you can enter an entire word list and view all of the translations at a single glance.

Here is one example of this technique:

In Column A of this Google Drive spreadsheet, you may enter any foreign word or phrase. In Column C, it’s English translation is revealed. What about Column B? It’s there, but I have adjusted the width so it is almost invisible. The formulas in Column B are actually quite important.

You can duplicate this spreadsheet for yourself. After creating a new Google Drive spreadsheet, you will need to create two formulas:

Next, you will need to take these two formulas and “fill down” as many rows as desired. Finally, adjust the width of Column B so that it is as narrow as possible.

Let’s take a look at what is happening with those formulas.

The part of the formula which says “=IF(A2=””,””…” is simply saying if the cell if Column A is blank, leave the corresponding cells in Column B and Column C blank as well.

The real meat is in the last part of the formula. The “DetectLanguage (A2)” returns an abbreviation for the language. I am not really interested in that part, so I made the column very narrow. Having that value, however, is important for the calculation which happens in Column C.

The portion of the second formula which reads “GoogleTranslate(A2,B2)” instructs the spreadsheet to look at the value in A2 and translate if from the language indicated in B2 into English.

What if I just want to translate one phrase?
What if you only have one word or phrase to translate? An easier technique in that instance is to search for “Google Translate.” The search result produces two side-by-side boxes. Enter a term in one. Google Translate will detect the language and return the translation, in your desired language, in the right-had box. 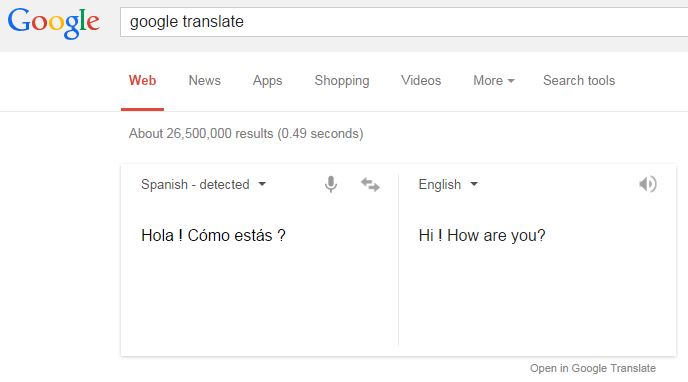 The advantage of this spreadsheet over the translation tools which have long been a part of Google is that you may enter an entire list of words or phrases and see all of their translations at one time.

The End of Paper Forms