Pictures of My Home Office

Pictures of My Home Office

The major project over the last several weeks has been moving out of an office and merging two offices (work and home) into one (home). In a later post, I will detail the list of tasks I worked through in order to wind things down at the office. Aside from the obvious tasks of collecting empty boxes, there are those less obvious tasks, such as organizing digital files that others would need and then wiping clean both my computer and office-issued BlackBerry to prevent others from seeing private information.

In this post, I will share pictures taken of my desk and files at home. In little more than a week following the last day at the office, everything is done except hanging the pictures and plaques on the walls. All of the books have found a home. Reference files are set up. All of this was in addition to spending considerable time finishing book #2. Here are some pictures of the desk at home. 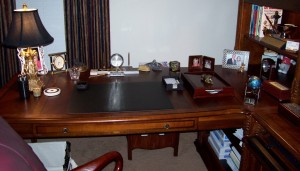 The desktop is free of paper, sort of a trademark for me. There may be more in the way of memorabilia on the desk for some would prefer, but everything has earned its place. Everything is special in some way. 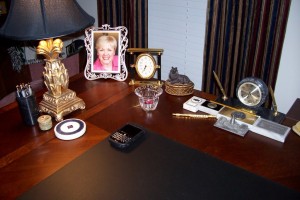 Some may wonder why I have two clocks. One is from my wife on my 45th birthday. The other is from the Pizitz Middle School Band as a going-away gift in 1993. For someone with no paper, I have quite a few paperweights. Again, each one has some meaning. A “Superior” rating medal from State Band Contest was made into a paperweight. Another is a medal from an honor band I conducted. There is a paperweight from a United States Senator during my childhood days. The “Outstanding Young Men of America” paperweight rounds out the quartet. The gold object in front of the paperweights is a miniature flute, a gift from my wife many years ago. (I have a degree in flute performance.) My wife, Davonia, is pictured at the corner. The candle is a present from a co-worker and very dear friend. 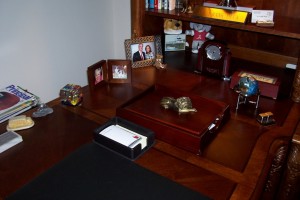 On the right-hand side of the desk is my Inbox. I picked that one up at Bombay Company for $10. It was s steal! The lid features a gold lion. The school bus paperweight in the left of the picture is a limited edition made from Georgia marble. The glass paperweight is a cube resembling an aquarium, a gift from a teacher during my days as principal. 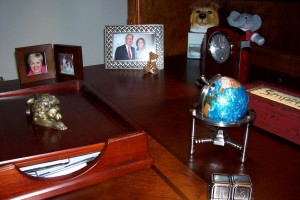 From left to right, there is a picture of Davonia, a picture of Bonnie & Skipper (our two Shelties), a picture of me with a very dear friend from work, a collectible bear given to me by that same friend for my 49th birthday, a clock given to me as a retirement gift by one of our principals, and the “Simplify” box given to me by my friend as a Christmas present. 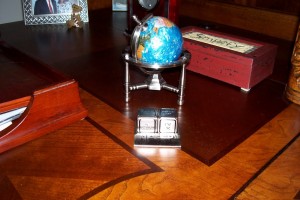 While I was presenting at the NAESP national convention in 2008, my wife was buying me a beautiful present, the globe which sits next to my Inbox. In front of it is a set of two cubes given to me as a thank-you gift for serving as an NAESP editorial adviser. Each side of each cube displays a different word or two. Together, the two cubes communicate a message. In all, 36 messages are possible. So whether I turn the cubes so that they say Be thankful…today, Recognize someone…without fear, or Think…with passion, it’s all good!

Above the desk are bookshelves. On one shelf, you see my nameplate from work. Just behind it is an engraved silver bowl, a retirement gift from the school system. The book end is part of a set given to me by my school when I left as principal and moved to the central office. 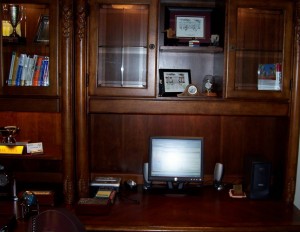 Over the computer, is more memorabilia. If you have been counting, you now see the 4th clock. This one is a Lasercraft clock with a nautical theme. To the right of the clock is a pocket watch. The inscription on the watch reads, “John P. Buck from Sister Xmas ’99.” John P. Buck was my grandfather and died before I was born. The “99” refers to the year “1899.” Just behind it is a framed note card picturing the front of the school where I was principal. The note cards were so attractive that framing one became a traditional gift for retiring teachers. 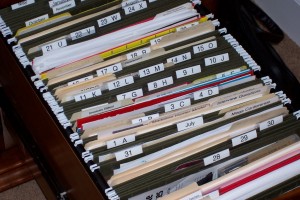 If the paper is not on the desk, then where is it? Anyone who knows me well will tell you the paper is in the tickler file. Mine is located in a drawer just under the computer, a 90 degree swivel from the desk. 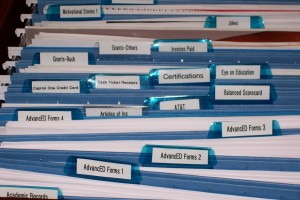 Across from the desk is an ornate filing cabinet matching the desk. Here is my reference filing system. 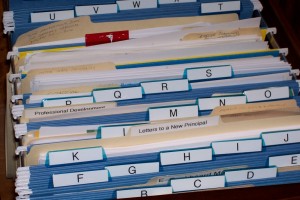 Finally, here is my set of “A-Z” files. Those who have read the book know that the contents of these files do not need to be acted upon, are for short-term reference filing, and most of the contents will eventually wind up in the trash can.

That’s about it. Everything I need is close at hand in a drawer. The desktop is clear. Perhaps a bit too much in the way of memorabilia, and certainly more clocks than necessary. But, everything there is a reminder of something or someone who has made a difference in my life. That’s the home office!

How to Succeed on “National Organize Your Home Office Day”

How to Pack a Great Organized Briefcase

Why “Chrome Tab Search” Will Make Your Life Easier

Organization, Time Management, and Productivity: The Best of 2020

A Simple Hack to Clear the Clutter