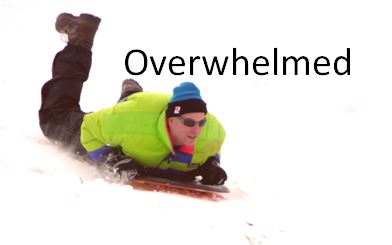 One principal who helped mentor me described the end of the school year as “…like being on a sled going down a steep, snow-covered hill. Things just get faster and faster and there’s nothing you can do about it. You just try to avoid running into a tree.” We forget just how much hits us until it arrives. The end of the year just seems the logical time to bring closure to just about any activity you can name. Everyone is trying to clear up everything all at the same time. Work shows up faster than we can possibly get it done. Without intervention, next year will be no different.

As the year comes to a close, we would actually like to enjoy it. Everything we have worked for all year long is now blooming. How nice it would be to savor the moment instead of feeling the stress of so much to do in so little time!

It doesn’t all have to be done right now.
Some of what is on our plates could wait until the dust settles. Our fear is that by the time we actually have the time, those good ideas will have been forgotten, so we try to cram it all in while things are fresh on our minds. Two simple tools allow us to take those worthy tasks and carve a place for them in our future. One more gives hope that we could prevent this onslaught next year.

The Tickler File
There are the physical things which are lying around in the form of papers and files. Their physical presence serves as reminder of the work to be done with them. Every time we look at them, we are distracted from the task at hand. That’s where the tickler file comes to the rescue. We have a pretty good idea of when the dust will settle and life as normal will resume. Drop those papers in the tickler file for that time. They will resurface exactly when you have decided you wanted to see them.

The Signature Tool
There are the mental things rolling around in our heads. Every one of them screams “Don’t forget to…!” yet still we forget. Those things which could be done later compete for our limited attention with those things which much be done now. Our signature tool, be it paper or digital, is the answer. Pick a date when things will be more settled. Write it down or key it in depending upon whether you system is paper or digital. Either way, you have earned the right to forget about it. It will come back on its own, and it will do so on exactly on the date you had chosen.

The Repeating Task List
Some of the avalanche is caused by other people. Some of it, we likely have nobody to blame but ourselves. It seems as soon as life settles down in June, we forget the feeling of overwhelm and what we might have done to minimize it.

The world of education is a cyclic world in which many of the same tasks and same projects repeat every year. Some of what we are doing in May could have been done in March, if only we had thought of it in March. You can structure a system which will cause you to think of it in March, or at any time you choose. I have spoken often of the value of the repeating task list, a simple tool which allows us to think of something one time and then let our system remind us at just the right instant.

Finishing teacher observations, scheduling next year’s dates, grading mountains of make-up work, or taking inventory of our equipment are just a few examples of the tasks which need not be able to left for the mad rush of mid-May. If all of what we are trying to fit into a small window of time was actually written down in one place, we would instantly realize that we have set ourselves up for failure and begin to do something about it.

Master these three tools and watch your productivity go up and your stress level go down:
1. Tickler File
2. Signature Tool
3. Repeating Task List

End the Insanity
Mid-May is a terrible time to fix the problems of mid-May. June is a perfect time to lay the plans and implement the procedures that will make next May the perfect end of a perfect year. What can you do now to prevent the insanity of this coming May?

Our two greatest problems are gravity and paperwork. We can lick gravity, but sometimes the paperwork is overwhelming.
— Dr. Wernher Von Braun

Help Me Write a Great New Book. Your Suggestions?

Organization, Time Management, and Productivity: The Best of 2020