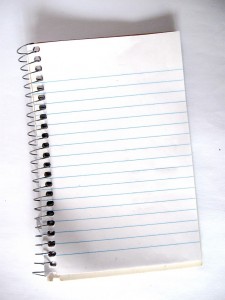 This past Tuesday, I attended a three-hour planning meeting regarding a project in which I have a key role. This post will walk you through the notes I took and what happens to them later.

Our meeting consisted of five people. One person took notes on a legal pad, a second in a spiral notebook, two others on iPads, and me with my journal. One thing I noticed was the three taking notes with pen and paper were taking considerably more notes than those using iPads.

At the top of the page, I wrote the date and below it the name of the committee. The meeting opened with a short video conference between the five of us and two people located in another city. The platform being used was called “ooVoo,” a program similar to Skype, but with what seemed like some advantages. Several of us were unfamiliar with the platform, and some of the discussion during that video conference centered around the platform itself rather than the agenda of the meeting. I was certainly one asking some of those question!

So where do I write the notes about “ooVoo,” a topic unrelated to the basic agenda of the meeting? Do I turn to another page? Do I just try to remember this one-off topic for later? No. The notes about ooVoo go right on that same page on the next blank line. I intend to research the platform later, so I jot a note to do so and place just ahead of it an asterisk, my shorthand that what I have written is not just documentation, but a “to-do.”

At one point, we talked about a conference held annually each September, and the desire of one of the committee members for me to able to attend. I jotted a note on the next blank line to research the dates for that conference and mark it tentatively on my calendar. As you might guess, I preceded this “to-do” with another asterisk.

At another point, we set several future dates. We each checked our respective calendars to be sure we were free. I jotted those dates in my journal, again preceded by an asterisk. Why did I not just enter those dates into my BlackBerry’s calendar and be done with it?

Two reasons. First, I need to let my wife know about those dates so that she can put them on her calendar. If I simply entered them on my BlackBerry, there would be no “trigger” to later share these dates with her. Even though my calendar is also synced to Outlook and to a Google calendar to which my wife has access, there is an important point to be made. When dates simply appear on calendars with no notification to its owner, it’s a recipe for disaster.

Secondly, good meetings take preparation. When I sit down to process the meeting notes and place the dates on my calendar, I also have the opportunity to think through what preparation needs to happen, and place those to-dos in my task list.

During a three-hour meeting, I must admit there were times when my mind wandered. I thought about things I need to handle that had nothing to do with the subject of that meeting. Where did I write those things down? Right on the next blank line with asterisks in front of any to-do. Nobody knew whether I was taking notes about the subject of the meeting or something entirely different.

When the meeting was over, I had a plenty of notes germane to the agenda. I had some “to-dos” related to that agenda. I also had to-dos related to “ooVoo” and other items totally apart from the purpose of the meeting. Yes, those notes were all mixed together. The important thing is that taking those notes was easy. There was no question about where to write. There was no “drag.” There was nothing that discouraged liberal note-taking. The next thing got written on the next line. Later, I process the notes. I make decisions about what needs to be done, put the to-dos in my list and assign due dates.

Once I have processed my notes, I will probably never have to look them again. But if I do, they are easy to find. If I know the date, I know exactly where to look, whether it’s a meeting, a phone call, or any other interaction where I would be taking notes.

This discussion may have been too detailed for some, but hopefully right on target for others who want the detailed “day in the life” scenario I have given you here.

After three posts related to taking notes, how has this series changed your thoughts? How has it reinforced your thoughts? What changes do you see down the road that may change the way we all approach this activity?