My Move to a New Smartphone

My Move to a New Smartphone

Those who have attended my “5 Keys” workshop or have read much of my writing have heard me talk about the value of having a “signature tool.” It serves as the place which provides the marching orders for the day. I call it a “signature tool” because when people see you, they see it. People associate that tool with you, and they also associate that tool with your level of productivity.

Index Cards, a File Box, and a Folder

My first “signature tool” took for form of 3″ X 5″ index cards and file box for them. Each card represented a day on which I had an appointment or some task scheduled. Beside the file box was a single file folder, a very rudimentary tickler file. Items such as the term paper completed two weeks before the due date was placed in that folder. A scrap of paper clipped to a corner told me when the paper needed to be seen again, and was placed in chronological order in that folder.

My morning routine consisted of pulling the index card for the day from the box and opening the file to see if there was any paper which needed to go to school that day. During the course of the day, the index card insured I didn’t forget anything. During the day, I would trap new “to-dos” on the back of the card. New calendar dates, homework assignments, or new projects which would need to later be broken into individual steps were all immediately written on the back of the card. My evening routine was to “clear the back of the card.” I either did what was written, or I wrote the appropriate instructions on cards for future days. Nothing slipped through the cracks.

Memo Pad
The index cards worked well through high school and college, but the world of teaching required more—although not a great deal more. Afull set of tickler files replaced the single file. A memo pad replaced the single index card. Thoughts went immediately to the memo pad, one sheet per task. Later in the day, those sheets were torn out of the memo pad and each one dropped in the appropriate tickler file.

Every morning, the tickler file for the day was dumped on the desk and those little slips of paper arranged in the order they should be handled. I was ready to take control of my day. Nothing slipped through the cracks. 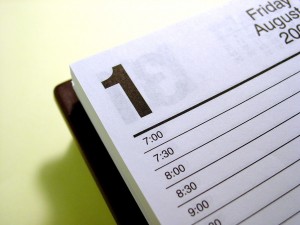 After a few years, responsibilities grew, the need for  a tool which would provide a more bird’s-eye view of my total commitments grew. A small loose-leaf notebook with a page per day gave me a place to list appointments and to-dos. I could build tomorrow’s list today. The tickler file continued to handle the papers needed in the future.

In many ways, the tickler file and the notebook were two sides of the same coin. Be it a piece of paper or an idea, I asked one question, “When do I want to see this again?” The answer to the question told me where to file that piece of paper, or on what page of my notebook to write that idea.

The homemade notebook was replaced by a Day-Timer, but the system remained constant. The Day-Timer saw me through my later days as a band director, through 4 years as an assistant principal, and through the first 4 years as a principal. During that time, I got married, completed three graduate programs in school administration, including a doctorate, and transitioned from teaching to school administration. Nothing fell through the cracks.

Our society has witnessed enormous change in the last century, and the changes that seem to have impacted us most have to do with things that plug into walls. The evolution of the personal computer is not only a shining example, but one that has escalated change to warp speed.

E-mail presented challenges to my paper-based organizational system. How to use the Internet without resorting to turning digits into paper presented its own puzzle. Digital problems seemed to require digital solutions. It was time to change once again.

Microsoft was setting the standard for how we would work. While Outlook Express was providing a free way to communicate through e-mail, I also had a more powerful tool at my disposal…Outlook. At the same time, a company called “3-Com” was producing a “Personal Digital Assistant” known as the “Palm Pilot.” While calendar software had been around for a few years, it had not been practical. When you got up from your computer, you also got up from your calendar and to-do list. The only other alternative was to print off the material, and now you are right back to paper.

3-Com renamed itself “Palm,” their device dropped “Pilot” from its name, and the Palm gave us a way to have our digital cake and eat it too. Do the heavy entry with 10 fingers on the computer. “Hot sync” Outlook to the Palm. Now your data could go with you anywhere.

The attraction was too great to ignore. The Outlook/Palm duo replaced my Day-Timer. I still asked the question, “When do I want to see this [idea, to-do, goal] again?” Instead of the answer being written on the page of the paper planner, it went into my digital system with the appropriate due date. The search features of this digital system allowed me to ask a second question—”What if I want to see it now?” No more flipping through pages to find where I had written instructions to myself when I wanted to retrieve them ahead of the appointed date. A quick search gave me the information instantly. Nothing fell through the cracks.

Five years after the switch to Outlook and the Palm, the school system issued a BlackBerry to each administrator. While most used it only as a phone which could retrieve e-mail, I had bigger plans. I synced my Outlook to the BlackBerry, giving me my calendar, complete address book, all of my tasks and goals, and a wealth of reference, all in my jacket pocket.

Five more years have passed, and that same system has served me well. However, the world of technology is shifting to the clouds. Along with it, we are seeing some great organizational tools which take advantage of it. I have been a BlackBerry fan, and have been watching RIM’s plight hoping they could regain the place they once held. For me, RIM’s announcement that the already delayed BlackBerry 10 would be postponed by at least another three months was the final nail in the coffin.

Moving Forward
Several weeks ago, I bought a Samsung Galaxy S III, the current “must-have” Android. Over the course of the next month, I will be writing about other major changes I am making in the desktop software I am using with it.

The exciting part is that I will be talking about tools which are free. I continue to believe in the BlackBerry and Outlook as great productivity tools. I will be able, however, to more effectively reach people who either do not or, because of their situation, cannot use those particular tools.

Along the way, I will welcome your comments, as many of you may already be using some of these same tools.