Just Show Up: One Key to School Success

Just Show Up: One Key to School Success 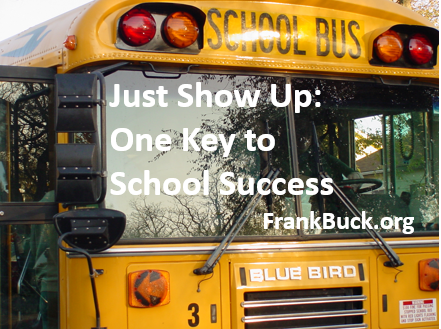 When the buses roll and the bells rings, the question in the mind of every parent and student is, “Will this school year be one filled with success or frustration?” One simple element is key to answering the question of school success.

Every year about now, I think of my friend Jack McDougal. Jack and I taught at the same middle school and our lunch periods coincided. Over lunch one day, the typical time we solved the problems of the world, I remember him saying, “Any student who really wants to can have a good attendance record.” It would turn out to be Jack’s students who would prove just how right their teacher was.

On the first day of school, all students in Jack’s homeroom were present. The same thing was true on the following day. Of course, perfect attendance is the norm on those first couple of days. No one seemed to notice when the first week came to a close and no student in Jack’s homeroom had missed a day. As the second week neared its end, still none of Jack’s students had missed a day. The secretary in the front office was the first to take notice. A week later, it had become the talk of the school. “15 days and nobody absent…How long can this go on?”

How Long Can This Go On?

Somewhere near the end of the 4th week, the class made an agreement. They knew that at some point, someone would be absent and break the record. They made a pact not to give a “hard time” to whoever would eventually miss a day. But the streak went on. “25 days and nobody absent…How long can this go on?”

Soon after, someone did miss a day. The streak was over. What remained was momentum. Everybody being there was the norm. Can you imagine what the teacher was able to accomplish when spending so little time on reviewing material absentees had missed? What remained was a feeling of teamwork. The streak of perfect attendance was something they had done together. Being at school every day had become a priority for everyone.

Certainly, illness happens and other circumstances arise which makes missing school unavoidable. At the same time, “convenience” accounts for far too many days missed, tardies, and check outs. For Jack’s kids, a certain sense of urgency was attached to being at school every day. A little more of that would be a welcomed thing.

Woody Allen once said, “Eighty percent of success is showing up.” Whether we’re talking about the workplace or schoolhouse, it’s pretty true.

What can we do to motivate good attendance among our students? What has worked in your school?

Managing School the Easy Way: Get Everything Ready the Night Before

Managing School the Easy Way: Learn to Deal With Papers

Managing School the Easy Way: Write It Down