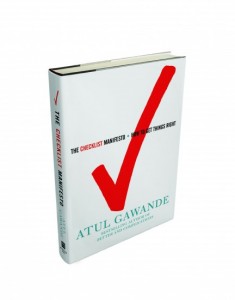 I like simple concepts, because the simple things are usually the things which wind up working. One shining example is The Checklist Manifesto, a book written by a surgeon and aimed at saving lives. The premise of the book? Develop checklists to be used in the operating room. Why would a doctor need checklists? Haven’t they been trained and know what to do? Of course they do. You and I have been trained for the jobs we do, but do we always remember every step of every routine exactly at the right time? If you are like me, the answer is a resounding “no.”

In a post entitled “I Do It When I Think About It” I talked about developing a system which causes you to think about things at the right time. This book operates along the same lines. Borrowing from pre-flight checklists used by airlines, author Atul Gawande’s idea was to devise simple lists to be used before the incision and during routines procedures. Instead of having everything rolling around in their heads and hoping they think about it at the right time, there is the list to use just before the incision. Would you want a system in place to be sure that nothing was being overlooked if you were on the operating table?

Set aside a little time to identify those activities in your life where a checklist would help.For a more in-depth review, you may this one or this one, both from the New York Times. You may also view an interview with the author on The Daily Show.

Personally, I did not think the concept justified the 200 page length of the book. I do think the book is significant in that it helps to hammer home the need to identify those tasks that we perform repeatedly and get them into a system.

As a principal, I used checklists to handle numerous routines. Closing out a grading period was one. Failure to run a “missing grades report” before running report cards could mean having to re-print them because a teacher had failed to post grades. Failure to e-mail our honor roll to the newspaper would mean that our students would miss out on that recognition. In fact, overlooking any one of the steps would cause a problem somewhere down the line.

I had a checklist for getting the students information system software ready for the next school year and even gave my checklist to other principals in the school system. On the first day of school, those who had followed it to the letter had no problems. Those who did not found their teachers could not take attendance because certain dates had not been entered in the office.

Set aside a little time to identify those activities in your life where a checklist would help. The tool does not inhibit your creativity. Instead, it takes care of the mundane and allows more energy for the creative aspects of your life.

The master thinker knows that ideas are elusive and often quickly forgotten, so he traps them with notebook and pencil. He heeds the Chinese proverb: “The strongest mind is weaker than the palest ink.”
—Wilferd A. Peterson in Adventures in the Art of Living

Some Checklists I Have Used

You See What You Think About…Checklists Revisited