“I’m Too Busy to Document”…Right

“I’m Too Busy to Document”…Right 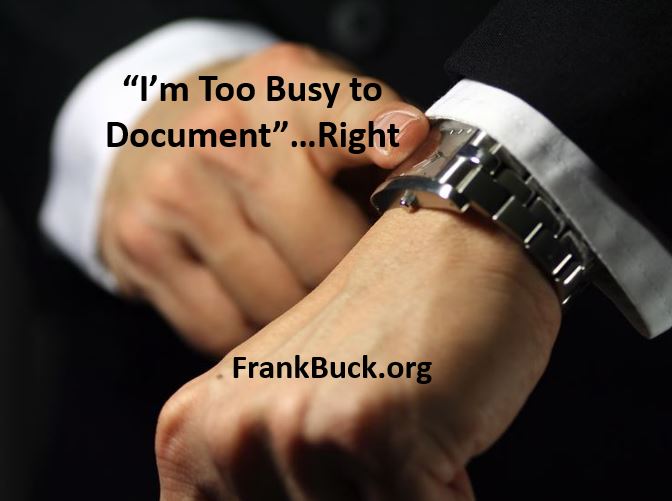 Even good companies are capable of isolated cases of poor service. Bringing those cases to the attention of the proper people helps keep isolated cases from becoming epidemic. Good management realizes the value of customer feedback that is specific. It has been my experience that they, in some way, communicate back with customers who took the time to first communicate with them.

My bad customer experience was…

I had such an experience with a restaurant chain. Following a visit in late December which was less than satisfactory, I picked up a comment card and used the address from it to write a letter to the company. My letter was returned as undeliverable. It seems that in addition to the other problems, the management at that particular site was continuing to use cards with an old address long after the company had relocated its offices. (No wonder the corporate office wasn’t getting any bad reviews about this unit.)

I re-sent my original letter, attached to a new one explaining the comment card debacle. When more than a month passed and without hearing a peep from the company, I decided to make a call. The receptionist transferred my call to the voice mail of the proper person.

Later in the day, my voice mail included a message from this executive whose tone implied my call was a bother and didn’t understand why I was calling. According to her message, she and I had already spoken and resolved the matter.

I returned the call, and the conversation made it clear to me that some people arrive in upper-management positions not because of good organizational skills, but in spite of poor ones. She stuck to her story of having spoken to me. She was able to go to the “Complaint File” and return to the phone with both of my letters.

As she read her hand-written notes from the margins of my letter, she related a story of having reviewed videotapes from the evening of my visit and finding that what I had said in my original letter was true. As she read, I became even more sure that this was not a conversation of which I had ever been a part. Perhaps she thought she talked to me, but there was no way I would have forgotten about the type of conversation she was relaying.

Finding this executive’s entire tone a bit condescending, I pushed a more on the point of her supposedly having already contacted me. After all, while there are some things which are a matter of opinion, this wasn’t one of them. Either we had talked or we hadn’t. One of us was right and one of us was wrong, and this was a matter of principle worth the investment of a couple of more minutes.

I asked her to turn in her phone log to our conversation.

A person in her position, who seems to be the one to whom customer complaints are routed, can’t afford for documentation not to matter. She finds herself talking with dozens of people each day and relying on her memory for the details of each conversation. What she has is a recipe for disaster.

The real kicker came when I asked for when she thought she had talked to me. I don’t know what document she consulted, or whether she simply pulled the date from her head, but what I do know is that what came out of her mouth was “January 10th.”

I looked at my calendar. On January 10th, I was out of town, and the only number I had provided in my letter was my home number. She could not possibly have talked to me the day she claimed.

I say all of this because…

I say all of this not to rant about a restaurant who couldn’t get it right, but to emphasize the importance of documentation for any professional.

The one thing which would have saved this executive was a journal, a simple bound book of blank, lined pages. She’s talking on the phone to 35-40 people every day anyway. How much extra time would it take to take notes on a call while she is on that call? Zero. When the call is over, the documentation is over. Close the book. That’s it!

Later in the day, look at what has been written in that book and make decisions about what actually needs to happen. The process is too simple not to use.

The truth is most of what we document will never be needed again. The challenge is that we never know on the front end what will be needed later and what will not.

At a CLAS Assistant Principals Conference, a young assistant principal approached me after one of my sessions. During that session, we had talked about the value of using a paper journal to trap communication from phone calls, parent conferences, meetings, etc.

He told me about a recent phone call he received from a parent. Unlike the restaurant executive, this assistant principal had talked to the parent about the same issue some two months prior. Unlike this restaurant executive, the assistant principal was able to flip in his journal and talk about the date they talked and what was discussed. He was further able to talk about what the man’s son had said when interviewed about the incident. Furthermore, he was able to discuss what other students who were interviewed had said.

While the incident happened two months prior, this astute assistant principal was able to use his journal and recount the events as if they had happened yesterday.  He, like many others with whom I have worked, wasn’t spending any additional time. He was simply writing during the course of his interactions. Further, he was writing everything in one place. Since everything was being written in one place, when he had to access those notes later, there was only one place to look.

Too bad the upper-level restaurant executive is “too busy” to document her interactions.