How to Procrastinate Effectively

How to Procrastinate Effectively 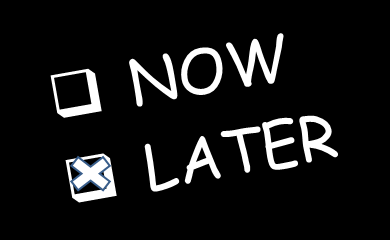 The title of the post is taken from a chapter title of an old time-management nugget. Time Power (1987) by Dr. Charles Hobbs, is one of the hallmark books on time management. Since its publication, much in our world has changed, due to technology. The concept that procrastination can not only be good, but is essential, is one which still rings true.

Time-management literature is full of articles on overcoming procrastination. Each one tells us how to avoid “putting off” our tasks. Authors portray it as a practice to avoid. Procrastination, however, is a friend for those who strive to get the right things done and get them done at the right time.

Procrastinate on your email
Let your email accumulate during the day. Handle it all in one batch at mid-day and again in one batch at mid-afternoon. As people begin to see your responses coming within the day rather than within the hour, you will receive fewer emails with inquiries the sender could have handled with a Google search or five minutes of thought.

You will begin to see little “batches” within your email. For example, work for one of my major clients normally results with several emails each day from teachers around the state who have questions about their data. To respond intelligently, I consult a spreadsheet housing a password for each school district, access one particular website, and with that password, log into that school district to view the data in question. That set of emails goes much quicker when I open the password spreadsheet once, access the website once, and handle those several emails back-to-back.

If you work with a large group of employees, your email will likely include items which seem to follow the same theme, such as questions regarding a recent communication. You may find you can fashion one response to handle them all.

Procrastinate on placing phone calls
School administrators are easier to catch after school. Procrastinate on making calls to them and handle however many you have in one batch.

Procrastinate on reading
I would include in this category books, magazines, your RSS feed, and social media. During the day, you will find yourself with odd blocks of time: waiting at the dentist’s office, sitting in the audience waiting for the concert to start, arriving early for a meeting and waiting for the other participants to show up. Having a supply of low-priority tasks which can fill the gaps turns potentially wasted time into productive time.

I read my RSS feed during those odd moments. While standing in line at the grocery store, I open Feedly and read the items from the blogs to which I subscribe. What I read there is certainly more beneficial that skimming the racks at the checkout aisle. Reading my Twitter feed happens at these odd moments.

When magazines arrive in the mail, I throw them into a decorative wooden letter tray. When I check books from the public library, I put them there also. I procrastinate on reading them. When I leave the house, I always throw some reading material in the briefcase.

Procrastinate on some writing
I am writing this post while sitting in the audience at a concert band festival. After the performance of each band, considerable setup for the next group is needed, leaving small blocks of time for audience members. I came with ideas for five different blog posts and hoped to write those five during the “breaks in the action.”

Jason Womack talks often about his practice of keeping blank note cards in his briefcase. After meeting Jason the first time, I received a hand-written note a few days later.

Procrastinate on those items which need to “bake”
Some projects simply need time for more thought and maturity before being launched. Additional, helpful information comes at the most unexpected time from unexpected sources.

Need to buy a car? Procrastinate on the decision to purchase and you will be surprised at how many reviews of your desired model show up, how many friends you see driving that model, and how many dealerships have that model at bargain prices.

Procrastination and the Three Bears