How to Approach a Wasp and Your Email

How to Approach a Wasp and Your Email 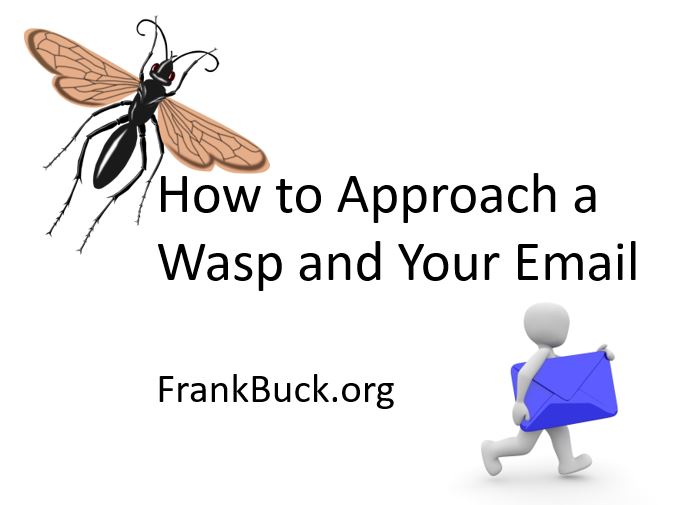 Summer is the time when all the flowers are in full bloom. It’s also the time when a host of insects are making their presence known. Not among the least of these multi-legged creatures is our friend the wasp.

Remember what mama told you…

“If you don’t bother him, he won’t bother you.” Is that what you heard as a youngster? It’s one of those truths that is wise to remember when the urge strikes to take a poke at him.

We often learn the hard way there are two intelligent ways to approach a wasp:

Anything in between results in pain.

Are you tempted to poke around in your email? Watch out. It’s painful. You are curious to see what’s there, but once you touch it, you might be surprised at the outcome. You wind up spending time and not accomplishing anything. Meanwhile, what you had planned for this time doesn’t materialize.

When it comes to email management, you have two good choices:

Where you should be spending your day…

Spend your time in your task list instead. Organize the list with your “Fab 5,” those five items that will pay the highest dividends, at the top. Order the other items so that your day has a smooth flow. Word the items clearly so they are attractive and easy to do.

Let the emails accumulate. Some of it will include dumb questions. Leave it alone, and the sender will figure out the answer for himself/herself. Some of it will consist of newsletters. Read them later (if you wish). Don’t let them divert you from the “Fab 5.”

At some point in the day, give email 100% of your attention. You are not just going to poke at it. Get the “Raid” and a shoe. Attack it. Go from one end to the other. Don’t stop until email is empty.

Is your email empty at the end of the day? If not, why not?

Lost in Spam: How to Stop Being This Guy