How Many People Does It Take to Change a Light Bulb?

How Many People Does It Take to Change a Light Bulb? 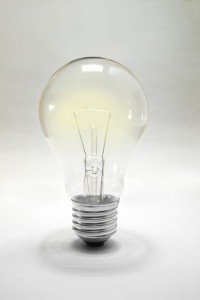 How many [fill in the blank yourself] does to take to change a light bulb? The original answer to the joke is, “Three,” with the punchline being “…one to hold the bulb and two to turn the ladder.”

An old joke among musicians says the task requires five trumpet players…one to change the bulb and four to stand around and tell how they could have done it better. In the case of the movie star, it only takes one…she holds the bulb and the world revolves around her. We can find pages of “light bulb” jokes. It’s a favorite way to poke fun at a rival college or different ideology.

The absurdity makes it funny

We all know it should take one person to change a light bulb, but we wait for the ridiculous answer and the even more absurd explanation. The absurdity is what makes the jokes funny.

What is not funny, however, are the real-life “light bulb” jokes. There are those tasks that could and should be handled by one person, yet wind up involving far more. Our time is wasted, our patience is tried, and we neglect the important work we could be doing in favor of the one-person job someone has seen fit to turn into a twenty-person job.

My background is the world of education. One of my pet peeves was to see teachers being asked to spent huge amounts of time collecting and reporting information when one person could have handled the whole job in a few minutes with software readily available at their fingertips. It happens in elementary schools and high schools, in the suburbs and in the cities, on the East Coast and on the West Coast. It happens every time we take a one-person job and begin farming it out to dozens.

“It won’t take anyone more than 10 minutes,” we say. When you start multiplying 10 minutes by the number of people being involved, the time adds up quickly. When we examine how many times bits of administrivia are dropped onto dozens of people, we begin to realize why people can’t accomplish the important work which would truly make a difference. They are so busy being forced to “major in minors.”

We are good at instituting procedures. The problem is that new procedures seldom replace old procedures; they are just added to what is already there. We institute software which does what our paper procedures did. But, we keep the paper procedures “just in case.” I have seen it happen time and time again. You probably have as well.

The poor leader’s mantra is, “One in, and here’s another, and another, and another.” Procedures duplicate procedures already in place. Dozens of peoples devote time to produce reports which are never read by anyone. Everyone is busy, yet nothing of substance is ever accomplished.

Spend time to save time

Today, our organizations have software that can crunch the numbers, organize the data, and spit out the reports that used to require teams of people many hours. All it takes is one person who understands the software to do the same thing in minutes. Why not spent the time mastering the capabilities of the software? Why not spend the time figuring out the task can be accomplished by a person instead of a whole committee?

How does your organization operate? Are a few, simple procedures taking the place of a boat-load of complicated ones? Is technology making your job easier or adding to your workload? How many of your co-workers does it take to change a light bulb? What can you do to end the madness?