How Google Docs Saved Us

How Google Docs Saved Us

About this time each year, high schools are busy planning graduation. One of those tasks is securing a graduation speaker, and in most cases is something that happens with little fanfare. April 29, 2009, almost three years ago today, an article broke in our local newspaper which shaped the course for the rest of that day, and paved the way for a great deal of excitement and hard work over the next month.

Months earlier, Superintendent Joanne Horton had the idea to extend an invitation to Dr. Condoleezza Rice to be the high school graduation speaker. Having left the office of Secretary of State several months prior and having ties to Alabama, we thought while it was a long shot, it was a request worth extending. Because it was a long shot, very few were told of the invitation. When a long shot became a reality, the plans remained confidential as many of the details were worked out. One of the decisions made was that our local newspaper, The Daily Home, would be the one to break the story.

The ceremony was to take place in the stadium, but in case of rain, having a “Plan B” was a necessity. The school system had a 1,500-seat auditorium, which normally would have been a gracious plenty. Under these circumstances, that auditorium was starting to look very small. In addition, Dr. Rice was still under Secret Service protection, and the Secret Service wanted to know the name of every person who would be attending the ceremony. How in the world were we going to handle the logistics? Enter Google Docs.

I created a Google Docs spreadsheet and entered across the top row the information we would want to know about each attendee: name, address, phone, e-mail, and how many tickets. I created a “form” from the spreadsheet (Tools>Form>Create a form). On the form, I edited the field for “number of tickets” so that instead of being a short-answer blank, it became a drop-down menu with “1” and “2” as the possible choices. I took the link at the bottom of the form and used it to create a link on the school district’s blog. 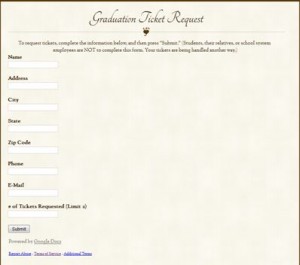 When people called inquiring how to attend graduation, they were simply told to go to the school district’s blog and click the link. There, they filled out their requests. As soon as they clicked “Submit,” their request automatically populated the next blank line of the spreadsheet, and the request was even date and time stamped.

The Google Docs spreadsheet was shared so that at any time, the superintendent, high school principals, appropriate central office clerical staff, and I could see all of the requests in the order they were received.

Communication needed to happen with every person who had requested tickets. If the event was being held in the stadium, each person needed to be holding a ticket because of the Secret Service requirements. In the case of rain, we had to notify people as to whether they could be accommodated in the 1,500-seat auditorium or whether they would be amongst the overflow watching the ceremony on closed-circuit TV in the high school gym.

We knew how many family members and close friends each graduate would have coming to see him or her, our first priority for seating in the auditorium. We knew how many teachers and their spouses would be attending, our next priority. Selected dignitaries had been invited, and we knew those numbers. Subtract the grand total from 1,500, and we had the number of people from our spreadsheet who we could seat in the auditorium.

All of the requests and all of the communications were handled easily, all due to Google Docs. I had always though of Google Docs as a time-saver. In this case, it was more like a life-saver

“Add-ons” for Google Docs and Sheets. Have You Discovered Them?

Super Demonstration of Uses of Google in the Classroom