How Do You Teach Your Students to be Organized?

How Do You Teach Your Students to be Organized? 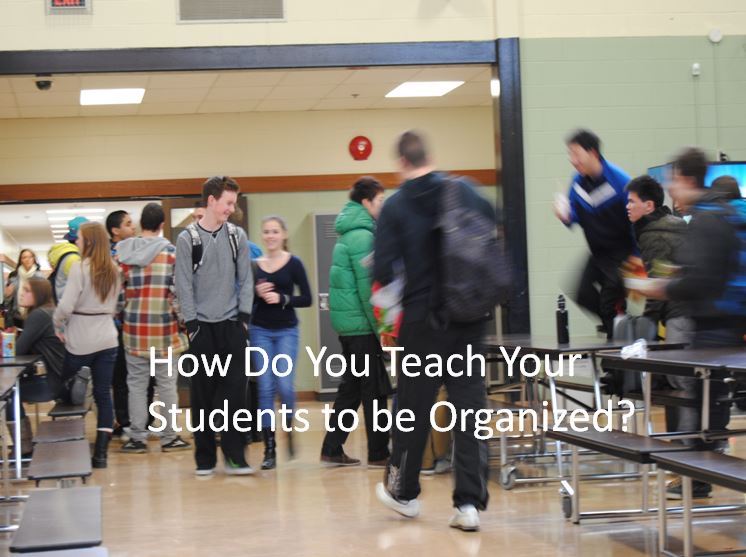 The subject of the December 1 #ALedchat  was “Organization Made Easy.” One of the questions we discussed was: “How do you teach students to get organized?” Here are some of the responses and the commentary I would like to add.

#ALedchat You must display organization to your students if you want them to follow suit! Show them why it’s so crucial. #ncc2101 — Marissa Brown (@marissa_brown11) December 2, 2014

A5: As with most lessons, it helps to model organization, but we also need to teach them the value in being organized. #ALedchat — Michael McLendon (@mclendonm) December 2, 2014

Todd Whitaker often says, “When the principal sneezes, the whole school catches a cold.” For those who are building-level administrators, I thinks it’s true that when students see us doing something that works, something that makes our lives easier, they are eager to learn the secret. The same is true for the classroom teacher. First, we “walk the walk,” then we are better equipped to help our students.

A5: Make it relevant, show them how, and most importantly expect it. #ALedchat

#ALedchat Organization should prove to be helpful to the students, not seem like a bother/extra step. #ncc2101 — Marissa Brown (@marissa_brown11) December 2, 2014

Adults are not the only ones who are skeptical of “one more thing to do-itis.” A tool that helps you organize your life is not “one more thing.” It’s the one thing that’s responsible for so many fewer distractions, missed appointments, embarrassment due to forgetting, and missed opportunities. As adults, we reach a point where we realize we can’t continue the “fly by the seat of the pants” approach and hope we remember the right things at the right time.

At some point, we realize we have to have a system. Many of our students see the need. They just need to know that it’s easy, it’s teachable, and they can have it much quicker than they ever imagined possible. As teachers, we have to provide the reinforcement until a good idea becomes an ingrained habit.

A lot of unnecessary stress comes from disorganization. Sometimes it helps to point Ss in the right direction for peace of mind. #ALedchat — Michael McLendon (@mclendonm) December 2, 2014

The statistics on doctor visits for stress-related conditions is staggering. The figure is something like 75-90%. The trend towards more information coming at us faster does not seem likely to subside. Our best hope is a system which traps what we need to see, presents it at the right time, and helps us filter the noise.

A5 #aledchat At the start of the year Ss put two pieces of paper at the front of their books for a T of C. EVERY piece of paper gets a # — Tanya Campbell (@one_schoolroom) December 2, 2014

Much of our discussion centered around digital tools. Because so much input comes digitally, it only makes sense that we have digital ways to deal with it. Let’s not forget, however, that we still have the influx of paper and needs ways to deal with it as well.

A5: Start off with a planner, and if they want to go more high tech, then they have they can. Start small, then go big. #ALedchat — Marissa Almquist (@MarissaAlmquist) December 2, 2014

Digital tools don’t make us organized any more than a calculator makes us better at math. The tool adds speed and efficiency. A paper planner is the perfect start. As a principal, my 1st graders used them successfully, and parents loved them. As students get older and their commitments arrive digitally, graduating to digital calendars and to-do lists is a natural progression.

Great example of that graduation to digital tools for organization.

Stay tuned for more tips based on the #ALedchat. If you would like to join in the fun, #ALedchat happens every Monday at 9:00PM CST.