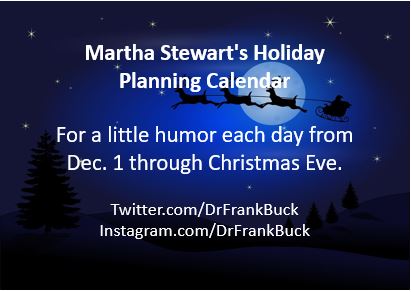 It’s been over 20 years since a humorous calendar was circulated at work. It was supposed to be Martha Stewart’s December calendar. As we all know, Martha Stewart has been synonymous with being super organized and super creative.

For a few years, I have shared the contents of that calendar a day at a time from December 1 leading up to Christmas Day. In fact, friends often ask in advance if I am going to share the calendar again.

As we speak, all two-dozen days are scheduled. I don’t have to do a thing between now and Christmas to bring these daily chuckles to you. Not only that. It took me less than 10 minutes total to get it ready. Ten minutes once a year. Not bad.

The purpose of this post is two-fold. First, yes I will be sharing this content again. Secondly, I want to tell you about the process I used to make it easy. Your project may not be creating two-dozen picture quotes for the Christmas season, but you will likely want to make a set of picture quotes at some point.

It starts with PowerPoint…

We have a number of options for creating picture quotes. Canva and PicMonkey have been go-to tools for many people. I have recently become fond of Adobe Express. If you are making a single quote and speed is the primary consideration, one of those three may be your option.

For me, nothing beats the flexibility of PowerPoint.

Turn the slides into separate files…

Prepare for next year…

People like quotes. When I post a quote, it tends to get more engagement than anything else. Making it a picture quote increases the engagement. You probably have a favorite set of quotes. In no time, you could turn them into a nice set of picture quotes you could share with others.