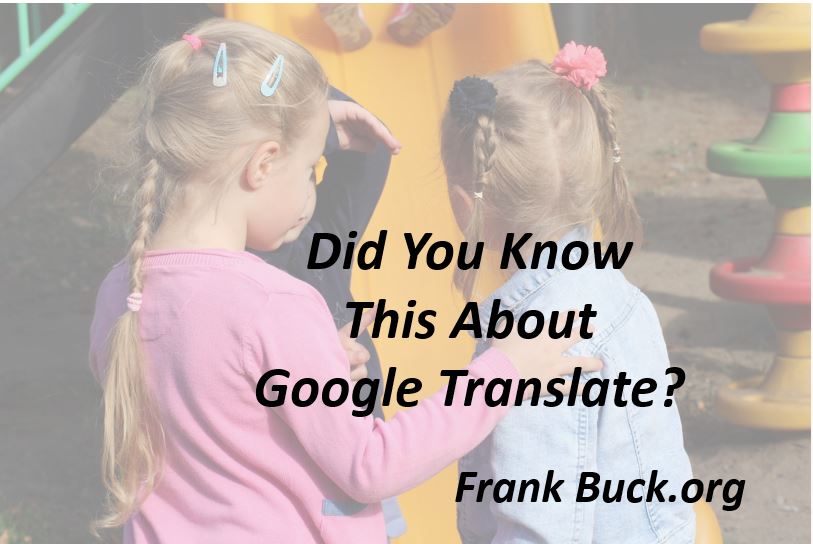 Three days from the morning I write this post, my wife and I will begin a trip to France. The 10-day excursion celebrates our 30th wedding anniversary. But there’s something on my mind…

Not even a few phrases.

Yes, I imagine most of the people I encounter will be used to American tourists and speak English fluently.

But wouldn’t it would be nice to have a “Plan B”?

OK Google, be my French interpreter…

Google Translate has been around since 2006, but it’s made remarkable strides. What excites me about this little friend is its ability to be a personal interpreter.

Here’s how it works. While connected to Wi-Fi, I say, “OK Google, be my French interpreter.” The phone opens the Google Translate app to the “conversation mode.” I speak my message in English.

Google speaks the French translation. It also displays the message in both languages.

Next, I tap the “Francais” button and allow my newly-found French friend to speak a reply in his native language. Google Translate speaks the English translation and displays the message in both languages. In other words, it functions just like a human interpreter.

And that’s not all…

If you have a Google Home device, it’s even easier. After the initial, “OK Google, be my [name of language] interpreter,” you and the other person carry on your conversation. No button to push. Watch it in action in this video.

And one more thing…

What about those signs posted in French? How will I know what they say? Just open the Google Translate “camera mode.” Select your language and the desired foreign language. Point the camera at the sign. Watch the camera image change to English.

Here’s an example. On the left is a sign in French from the Internet. I opened Google Translate on my phone to “camera mode” and pointed my phone at the computer screen. On the right is the result.

It’s a good thing I got that “heads up.” Otherwise, I could have been towed!

Absolutely not. Those who speak foreign languages fluently report that the translations aren’t always exact. Syntax can be inaccurate, for example.

What Google Translate gives us is meaning. It allows communication to happen where a language barrier would have otherwise prohibited it.]

3 Handy New Features in Google Chrome (Check Them Out)

4 More Videos That Should Have Gotten More Views

What’s Google Lens? Why Is It Super Important Now?

How to Build these Amazing Google Assistant Voice Commands