Gmail’s Tabbed View: Thanks, But No Thanks

Gmail’s Tabbed View: Thanks, But No Thanks

A little over a month ago, Google rolled out its new Gmail inbox. The design allows the user to have multiple tabs across the top of the inbox. Gmail would automatically sort various types of emails into the correct tab. This video illustrates how it works.

Regardless of how we arrange the inbox, one fundamental truth remains: In order to keep from being eaten alive by email, we must be handling it at least as fast as it comes in. Failure to do so means that the 100 emails in the inbox today turn into 300 by next week and over 1,000 by next month. Spreading them over 5 tab gives the impression of being able to see what’s important and handle it now. We tell ourselves we will handle the rest “later.” But “later” never comes, and the backlog grows.

Countless articles have been written warning people of the perils of interrupting the work at hand to glance at the latest email which has arrived. With part of our focus on our current work and part on the new email, we are ill-equipped to handle either one. We wind up reading and re-reading emails while making no progress on them.

What works is the discipline to ignore the inbox until you can devote full attention to it. Start at one end and work straight to the other end, making decisions about each email as you come to it before moving quickly to the next one. Seeing a list of 20 more emails below the one you are handling is good motivation to give that one the time it deserves and no more. It’s hard to see how much is left when your work is spread across 5 tabs.

Gmail offers another option. It’s been around since 2010 and works quite well. It’s called “Priority Inbox.” Priority Inbox presents all of your emails on one screen, but segments them into three groups. At the top are the emails Google has determined are important. At the bottom is a section Gmail calls “everything else.” In the middle is a space where emails you have “starred” are grouped. That segmentation gives me all I need to see what might need my attention first or may need considerable time to handle, and what can be handled quickly and with no time deadline.

This video demonstrates the concept of the Gmail Priority Inbox.

Gmail learns which emails are important using criteria such as which ones you open and which ones you reply to. If Gmail makes a mistake, you manually mark an email as important or not important. In the future, Gmail will treat emails from that sender according to those preferences.

If you are a Gmail user, you can turn on Priority Inbox at any time. If you are using the new tabbed inbox, you can change to Priority Inbox. On the left-hand side of the screen, mouse over the “Inbox” label and click the drop-down arrow which appears. From the menu, choose “Priority Inbox.” 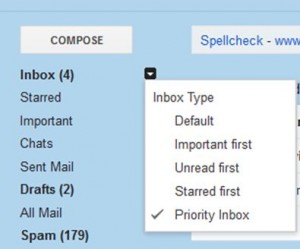 On your mobile devices, go to the Gmail app. On the settings, tap on your email address. Select “Inbox type” and then “Priority Inbox.”

At the end of the day, the entire inbox is empty, and I only have to look one place to be sure it’s empty. If you are a Gmail user, I highly recommend Priority Inbox.

Lost in Spam: How to Stop Being This Guy

How to Write Better Emails Instantly

The Surprising Thing Causing You to Misplace Important Email