Forget the Answer. Do You Know the Question?

Forget the Answer. Do You Know the Question? 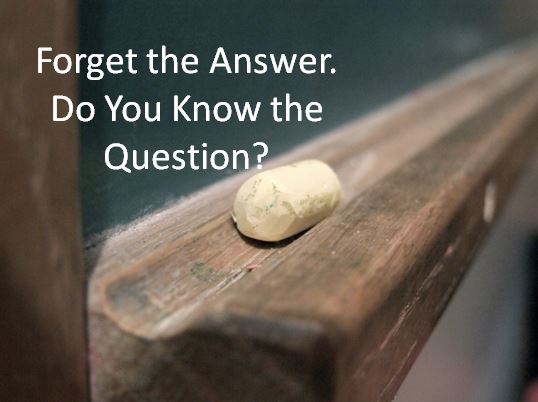 Our world is moving forward at a blinding pace, and technology is leading the charge. No matter where we are on the continuum of “tech-savviness,” there are those who look to us as being the “tech guru” while we are awed by others who are so much farther down the road than we are. Those who can solve the problems and find the answers are essential. There is, however, another group who is as valuable–if not more valuable. They are the ones who ask the right questions.

Perhaps the most memorable of these experiences happened some 20 years during a talk with the school system’s transportation director. Those who work in small school systems wear many hats, and Jim was a prime example. He began to show me the paperwork nightmare that was his system for keeping up with field trips. Calendars with multiple pieces of paper stapled to them littered the desk. Invoices had to be typed at the end of each month for each school listing every field trip taken and the amount owed. In the midst of lamenting about his paper avalanche, Jim asked the question that overnight changed that transportation system.

“Frank,” he said as he glanced at the AppleIIGS sitting across the room, “is there any way the computer can help me?”

Jim knew little about computers, and at the time I knew even less about transportation. However, Jim was able to describe the kind of information he needed. It would be a conversation which would have long-lasting effects on both of us.

The next day, I was back in Jim’s office with a database I had created on AppleWorks. The input screen was designed to parallel the paper request forms that were submitted to him. Input, thus, was made so simple he could delegate it to an assistant. Jim could simply assign drivers and then view reports which would show him information by date, by driver, or by school. Best of all, the labor-intensive task of typing end-of-the-month invoices was now a simple matter of running one report. What had previously taken hours now took less than a minute.

For years, that school district ran its transportation system from that simple database. Along the way, Jim found shortcuts. That tends to happen when average folk like you and me start to sit down and actually use technology. We get better. Eventually, we get very good at it.

My former school system came a very long way in terms of moving from paper housed in filing cabinets to digital creations housed on its intranet. Spreadsheets I designed locally began to receive statewide use. Above all, we were doing it all with minimal staff and with tools that practically everyone already had at their disposal. The key to it all is that we had a few people who have been around technology long enough to appreciate the promise it holds. When confronted with a problem that involves data or copying information from one place to another, their first thought was to ask the same question Jim asked 25 years ago.

“Dr. Buck, is there any we could get the computer to…” That’s a question that those who have worked closest to me tend to ask frequently. “Yes” is the answer they tend to get, and then I can get busy figuring out how to do it.

I am beginning to understand that we can never find an answer to a question which has not been asked. Whether we are good at finding the answers or good at asking the questions, we can all play a valuable part in the bigger game, provided we choose to play at all.

What questions in your environment have gone unasked for too long? What role can you play in asking them? What are you waiting for?