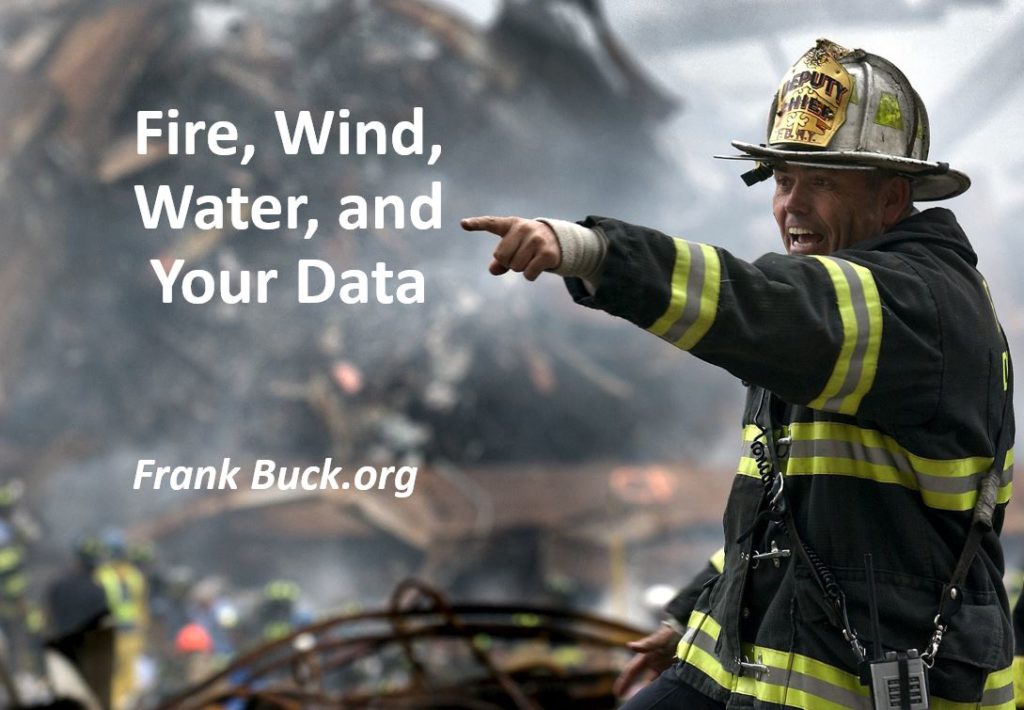 I was to take part in a podcast when I received a short, but alarming email from the host. The building housing his office had caught fire, and he was on his way to assess the damage. The office was a total loss, except for his favorite chair. He would find other office space. Yes, the insurance policy would cover new furniture and technology. Soon, he would  be “open for business” again.

I asked him this question, “Did you lose any data?” His answer was, “No, not a bit.” I wasn’t surprised. He knows the value of his data and how easy data backup can be.

We can always buy new desks, chairs, and computers. But all the insurance money in the world won’t replace our records. Imagine the client data, financial records, and legal documents that could literally go up in smoke. Because of a good back-up system, his data was secure.

Five days later, a tornado ravaged Jacksonville State University. We’ve seen the pictures of the damage to buildings and trees.

But what about their data? What about student records, payroll information, and records of library holdings, just to name a few examples. If this disaster had happened when I was a student there 35 years ago, much of that data would have been lost. My guess is because of good data backup routines, their information was secure.

Hurricanes named Harvey, Maria, and Irma dominated the news as they spread their respective paths of destruction. Left behind were flooded homes and businesses. Insurance allows families to replace furniture, clothing, and the like. It doesn’t replace photos, records, and information gathered over decades.

What About Your Data?

A natural disaster could strike any of us. While modern technology allows us to predict the weather, our ability to control it is nil.

If a disaster destroyed your computer or mobile device today, what would you lose? For starters, if you are one of those who has countless icons on the computer desktop, it’s time to change that. Many people have screens so full that icons sit atop other icons. Not only does finding anything become difficult, but they’re flirting with losing information.

Should the computer crash, say goodbye to anything saved to the desktop. It’s not backed up anywhere. You also don’t have access to that data from anywhere else.

Data backup used to mean purchasing an external hard drive. From there, you either configured a backup routine or had to somehow remember to perform the task manually. Of course, if disaster struck, you still lost any changes since the last backup. In addition, if the drive which housed the backup was onsite, the same disaster which destroyed the computer could also destroy the backup.

This video demonstrates the process on iCloud.

Now, Microsoft or Apple are housing a copy of your data. They will do a much better job of backing up your data than you or I could ever image.

We’ll continue our talk on data backup. We will talk about Dropbox. After that, you’ll learn the easiest way to backup your photos.

After reading this post, how do you feel about your own data? If Mother Nature struck today, how much data would you lose?

What You Need to Know About Google Photos

Ouch! The Dangers of Not Backing Up Your Data