“Snooze Gmail” is Tempting, but Here’s a Better Way

“Snooze Gmail” is Tempting, but Here’s a Better Way 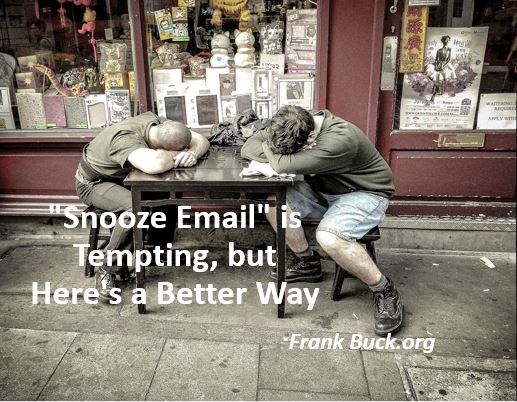 Sometimes an idea seems good on the surface, but comes with its own share of baggage. It “clears the deck” for now, but mortgages the future. One of Gmail’s new enhancements is a prime example.

In April, Google gave Gmail the most significant upgrade in its history. If this information comes as news, the upgrade is available now. In Gmail, click the gear icon in the upper-right corner. The very first option is “Try the new Gmail.” It’s something I recommend.

But here’s a feature I don’t…

One of the new features is the option to “snooze” an email and have it return at some point in the future.

While reading a message, you can choose to “snooze.”

On the surface, snooze Gmail seems like a good idea. Often, people can’t act on an email right now. They are busy with other projects. The resources needed to complete the task are not at hand. The inbox is overflowing, and the thought of making some of them go away seems appealing. The “snooze Gmail” feature removes the email from the inbox and automatically returns it later. 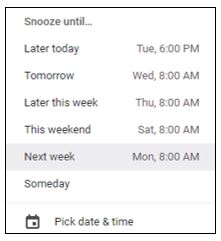 Pick a day for the “snoozed” email to return.

Other products revolve around this very feature. Boomerang, Nudgemail, and FollowUpThen are a few examples. But, taking advantage of “snooze” meant introducing an additional tool into the arsenal. Now, Gmail offers it as a built-in feature.

“In today’s world, tons of information arrive digitally. Doesn’t it make sense to have a system that keeps digital information digital?”

Why “snooze Gmail” is not the best idea

Jane opens a new email. She reads it. She puts some thought into what this email means and exactly what she needs to do about it. Jane then decides to defer taking action until next Thursday. That’s where “snooze” comes in. Jane clicks an icon above the email and chooses Thursday’s date. The email disappears and magically appears next Thursday.

What’s the problem? Next Thursday Jane starts from “square one.” She now tries to reconstruct her thoughts about the action to take on that email. She’s doing double work. Multiply that time by the number of emails Jane has snoozed. You start to get a feel for the time-waster she has introduced into her productivity system. Like Lucy and Ethel at the candy factory, the “snooze Gmail” appears to be reducing inbox clutter now. But, it returns as a giant snowball later.

What to do instead

In today’s world, tons of information arrive digitally. Doesn’t it make sense to have a system that keeps digital information digital? I’ve often talked about the benefits of using a digital task list to stay on top of responsibilities.

One of the features of any good task manager is that it provides the user with a special email address. Send something to that email address and it appears on the digital task list. Put this address in Contacts, and it’s easy to add to the “to” line of any email.

Sally opens a new email. She reads it. She puts some thought into what this email means and exactly what she needs to do about it. She then decides to defer taking action until next Thursday. Sally clicks “forward.” In the “to” line, Sally enters the special email address for her digital task list. She changes the subject line to reflect the action to take next Thursday. The subject line that did read, “Upcoming conference,” now reads, “Call Mary about available funds for the XYZ Conference.”

As she plans for the actions to take next Thursday, Sally adds those thoughts in the body of the email. If she is using Toodledo, she appends to the subject line a hashtag and date. For example, she could add #6/14. On June 14, Sally opens her digital task list. She sees, “Call Mary about available funds for the XYZ Conference.” In the note section of that task are her other thoughts as well as the entire body of the original email. No re-thinking! Sally makes the call.

A long-standing time-management rule says, “Handle it once.” For tasks you must defer to the future, “handle it once” is not always possible. A good rule for this age of overwhelm is “think it through once.” Do the thinking on the front end and trap it in your digital task list. When the task returns, your thinking returns with it.

Do you use a digital task list? If so, which one? Are you already sending your emails to your task list?

The Power of Gmail Voice Entry: It’s Amazing and Easy

Google Contacts Gmail Add-On: What You Need to Know

The Surprising Thing Causing You to Misplace Important Email