Documentation Made Easy: The Journal

Documentation Made Easy: The Journal

The subject for this article was shaped by two totally independent conversations, both held within one week. I had the pleasure of conducting a full-day workshop with a group of east Tennessee administrators. One of the principals had heard me present before. She is extremely technology savvy, and the group as a whole was knowledgeable about technology and hungry for more. A few minutes before I began, she asked me, “Will you be talking about the journal you use for documentation?” 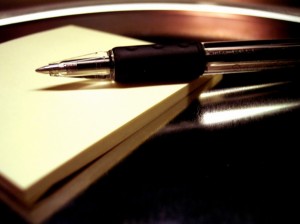 Later in the same week, I was visiting a friend who is principal at a school which is on the cutting edge of technology in many ways. During the day, the topic of conversation turned to “the journal.” How interesting these two conversations with digital people turned to this paper-based topic!

As digital as I am, my journal has been a trusted friend for many years. It is nothing more than a book of blank lined paper with all of its contents arranged chronologically. When I sit down for a one-on-one conference, that book opens. It goes with me to every meeting and is open on my desk ready to accept notes from every phone call. Moreover, it is one journal. Not one for meetings, another for one-on-one discussions, another to serve as a phone log, etc. One journal holds everything. Therein lies the beauty and simplicity of it all.

Each day begins where the previous one left off. At the end of the day, I make decisions on what I need to do about those notes and put the results of those decisions on my to-do list. I also think about when I may want to see those notes again. When all of the pages are full, the journal goes on the shelf and a new one takes its place. In one of the conversations mentioned, a principal told of an issue involving dismissing a teacher in the middle of the previous school year. Every administrator knows that documentation, and lots of it, is necessary to make a termination stick. The principal explained how documentation of the teacher’s performance had been included in the journal. Before dismissing the teacher, an attorney was consulted to determine if the documentation was sufficient.

The attorney’s response came in two parts. First, he said, the amount and detail of the documentation was sufficient. Equally important was there was documentation related to so many different things. It was obvious this was not a plot to single out one person, but rather a comprehensive system of documentation that captures the good, the bad, the routine, and the out-of-the-ordinary, all in one place.

Those who have attended workshops with me hear of the day during my principalship the Department of Human Resources showed up at my door to tell me that a complaint had been filed against one of my teachers. As the case worker talked, I opened my journal to notes taken months earlier which showed clearly the teacher had done nothing wrong. Before leaving my office, that complaint was dropped, all because of the documentation I had taken during a routine meeting, notes I thought I would never need again.

We never know when a situation that seems unimportant may later become crucial. We need a system that allows us to trap notes on the fly, needs next to no maintenance, and allows us to get back to our notes on demand. My journal has made the job of documentation easy…easy enough I will actually do it.