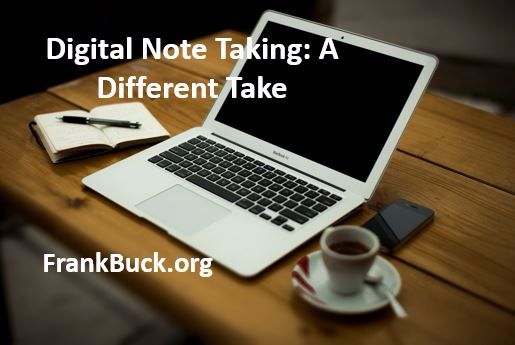 This post is the 7th in a series all about taking notes. In our last post, we began a discussion on digital note taking. The approach described in that post is as follows:

From Reference Material to Tasks

The above approach works great for situations such as sessions you attend at conferences. Generally, your role there is that of an audience member rather than an active participant. Taking notes digitally is not a distraction for those around you. Besides, you are able to take photos and audio notes within those notes. That’s an area where paper cannot compete.

Your notes are, for the most part, “reference material.” Evernote (or any other note-taking app) is the place for reference material. If the session is a good one, it will trigger ideas for you that you will want to act on later. You enter those items in the same note and precede them with check boxes. Those items become the ones which you transfer to your task list.

That approach may also work well in meetings. By the same token, it may not. Are you well-versed at entering information while taking an active role in the meeting? Is your technology distracting to others? You may or may not want to take notes straight into Evernote.

An alternative would be to take notes on scrap paper and transfer them to Evernote later in the day. That approach is the modern-day version of what we discussed in the post which began this series.

This approach falls short when a task or project has many interactions. You talk with John on the phone and then call Mary to let her know about the discussion with John. You find a bit of information related to the project. Later, you call John again to discuss your most recent findings. Wouldn’t you like to keep that information together? Creating a separate note in Evernote for each call would prevent you from seeing the big picture.

From Tasks to Reference Material

I have an approach to handling notes from phone calls that is rapidly becoming my favorite. The information begins in my digital task list. When the task or project is complete, and no further action is needed, I copy the notes to Evernote. They now become reference information.

Call from the Mad Dad

Put yourself in the position of a school principal fielding a phone call from an upset parent. You recognize the situation as one that may need many steps. You need to talk to a series of people. Resolution may take many steps over several days. One chapter in the new edition of my book addresses this issue in detail. Entitled, “Handling Multiple Projects,” you see a system. You learn how to keep track of the tasks and information that relate to a project.

When the Dance is Over

Having the date and time of conversations is good. I use a browser extension called Auto Text Expander for Google Chrome. Stay tuned for a post next month devoted to that topic.

Our information is only as good as our ability to find it when we need it. The purpose of this series is helping you find a medium for taking notes that works. Have a thought? I would welcome your comments.

How to Be Successful with Digital Note Taking