If your hard drive crashed today, what would you lose? That’s a question I have posed for years during workshops. The “train wreck” picture invokes a reaction not unlike the one you or I would have if suddenly finding everything gone. Having a backup is a necessary insurance policy. Like everything else, the available tools make the process easier. 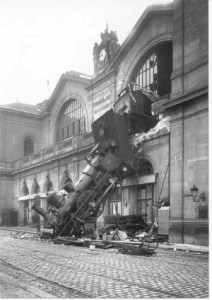 My Pre-Cloud System
For many years, my digital filing system has centered around three folders on my desktop:
The “My Documents” folder has served as my digital filing cabinet. Open it, and you see neatly-labeled folders containing reference material. No action is required on the documents which reside there. Just like the metal filing cabinet which houses reference papers, the “My Documents” is where I can go when I need to find information. My practice has been to backup everything in this folder once per month on an external hard drive.
The “Current Projects” folder served as the place for anything classified as a work in progress. The report on which I am working, the unfinished term paper for the class I am taking, and supporting documents for open projects will be found there. In fact, just opening that folder provides a clue as to what is on my plate. My procedure had been to backup this folder weekly on that same external hard drive.
The “Fingertip” folder is for those few items I use regularly. The school letterhead would be one example. Rather than having these items nested in folders requiring multiple mouse clicks to access, I have them in a folder on the desktop. I included this folder in my monthly backup.
The upside of the system was that I was creating a backup on a regular basis. If the hard drive crashed, I would not lose everything. At most, I would lose what had been created or changed during the past week from the Current Projects folder and whatever had been created or changed during the past month from “My Documents.”
The downside was I could still lose some data. In addition, if something happened to both the computer and the external hard drive, all of my data would be gone.
Enter Dropbox
Dropbox offers me two significant advantages:
Dropbox became my “Current Projects” folder. I dragged all the documents and folders that were in the Current Projects folders into Dropbox and deleted the old folder. My rationale was that anything which was a work in progress was something I would want to be able to access from anywhere.
Likewise, the items in the “Fingertip” folder also need to be accessed from anywhere. To accomplish this objective, I dragged that entire folder into the Dropbox folder. So that I could still have the “Fingertip” folder on the desktop, I created a shortcut to the Fingertip folder and dragged it to the desktop.
Now, I had a system which would provide an instant backup for those items which are works in progress. In addition, I could get to them from anywhere.
Enter SkyDrive
The final move was to put “My Documents” in the cloud. When SkyDrive became available, I was one of the early ones to create an account. Back then, the account came with 25GB of free storage. That number has dropped to 7GB for those who sign up today.
My idea was to have everything in the “My Documents” folder sync to SkyDrive. Here is how I accomplished that objective:
Do you have a laptop or other computer from which you work? If so, download the SkyDrive desktop application there and perform the same steps to have the “My Documents” folder move to SkyDrive. The documents from each computer will now be available from each of the other computers. In addition, you would be able to log into SkyDrive from any computer which has Internet access.
My “filing cabinet” is now stored in SkyDrive and instantly backed up. If the hard drive fails, I lose no data. If my external hard drive is stolen or damaged, my data is still safe in SkyDrive.
I continue to perform a monthly backup of SkyDrive to that external hard drive. Just in case something was to happen to delete items from SkyDrive, and hence delete them on my computer, I want one more level of protection.
Safeguarding our important data has always been important. That’s why people purchase a fire-proof safe or rent a safe deposit box. Our tools have changed, but the vigilance in protecting our data remains the same. SkyDrive for my reference items and Dropbox for my current projects and commonly-accessed files gives me the peace of mind and the convenience I seek.
Share this post
Previous
Next

What You Need to Know About Google Photos

What I Learned During My “Summer Vacation”