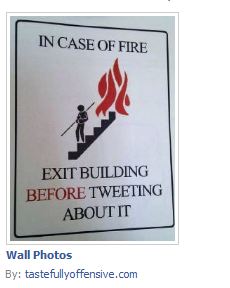 The only problem is that increased content not only means more good content, but also more bad content. Personally, I don’t care who had lunch where, or how much traffic they encountered at the local shopping mall. I want quality. What can I do to get the good content without also being overwhelmed by a flood of all the other stuff?

Thanks, UberSocial
UberSocial is the Twitter client I have used on my BlackBerry for some time. An update of UberSocial featured something called “My Inner Circle.” The idea was that you could identify certain people you follow as being in your “Inner Circle.” From there on, any time you clicked on the “My Inner Circle” icon on UbberSocial, you saw the tweets from just those selected people.

Who are those people whose tweets you always want to read? I would imagine you have some, but they are the minority.

Inner Circle, Priority 2, Priority 3
You don’t have to use a particular client, such as UberSocial, to establish your own Inner Circle.Twitter has a feature which it calls “lists.” Next time your are looking at Twitter on your computer, notice the “Lists” tab. It is located just below the box where you enter your tweet. Click on it and then look for the option to “Create a list.”

Create a list called “Inner Circle.” You have the option to search for people to include in the list, but I would skip that step at this point. Instead, create two more lists called “Priority 2” and “Priority 3.”

To this point, all you have done is create a name for each list. Now, let’s add people to them. While you are at the Twitter home screen, click on the “Followers” link. You now see all of the people you are following. Beside each person, you will see a drop-down menu. One of the choices is “Add to list.” When you choose that option, you will see the name of each list you had created. Assign the person to “Inner Circle,” “Priority 2,” “Priority 3,” or no list at all.

I also have lists such as “Education,” “Technology,” and “National Figures.” A person can be assigned to more than one list.

Setting Up Lists on TweetDeck
I use TweetDeck as a means of organizing tweets and allowing me to schedule specific dates and times for each of the tweets I compose. When you click the icon to add a new column, you are given the option to assign that column to one of your lists. I have a column on Tweetdeck for each of my lists. In addition, I have columns which search for particular hashtags, such as “#Timemanagement,” and return every tweet which is using that hashtag regardless of whether or not I follow that person.

Staying on Top of Twitter
Now that you know something about my setup, let’s look at how I how I handle reading Twitter on a daily basis. In short, I want to read everything written by those who are in the “Inner Circle.” I can easily accomplish that during spare minutes in the day. For example, when I accompany Davonia to the grocery store and am pushing the cart down the aisle, I am reading Inner Circle tweets. When I start reading tweets I have read before, I know I am finished with the Inner Circle.

Many of the people I follow, are not in any of the three priority groups. To be honest, I may never see their tweets. We all have to draw the line somewhere, and I have drawn mine. I can stay on top of the “Inner Circle,” “Priority 2,” and “Priority 3” tweets. It gives me a sense of completion, and we all need that feeling.

Since establishing the three lists I have addressed in this post, I have felt much better about my experience with Twitter.

Twitter Publish: A New Way to Tell Your Story