Bring Your Own Shoes

Bring Your Own Shoes 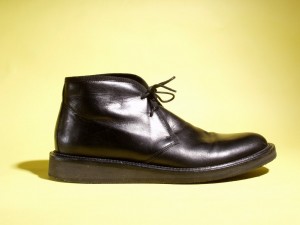 We are almost upon that time in the school year when retirements happen and shoes must be filled by other people. The events of the past week have reminded me of how those entering new positions can handle this situation, especially when the shoes left vacant are large.

In my last post, I wrote about a recent trip to St. Martin’s Episcopal Church and the many coincidences that exist between me and that Houston church. The story, however, goes a little further.

When I moved the Birmingham area in 1985, I attended the Cathedral Church of the Advent, under the leadership of The Very Rev. Larry Gipson. Gipson was a seasoned and powerful figure in the pulpit. Several years later, I found myself at St. Luke’s, another large parish in a Birmingham suburb. At that time, one member of the clergy was Russell Levenson, a young and enthusiastic minister with a thirst for knowledge.

Fast forward several more years, and we see Larry Gipson receive the call to become Rector of St. Martin’s, at that time the 3rd largest Episcopal Church in United States. That was the first I had ever heard of that parish. Over the years, St. Martin’s became the largest Episcopal Church in America through the leadership of the one I had known at Advent. Around this same time, the much younger Levenson also moved to lead churches of his own.

It was about two years ago that I visited St. Martin’s website and learned quite by accident that Larry Gipson had retired. His successor was none other than Russell Levenson, the young minister I had known 20 years earlier. “How in the world could anyone follow Larry Gipson?” I thought.

I found recordings at the website of past sermons and came upon Russell’s first sermon to the St. Martin’s congregation. What would he say? How would be begin to follow someone of the stature of Larry Gipson? That sermon answered my questions.

In the sermon, Russell Levenson acknowledged openly that he realized the congregation was grieving over the retirement of Larry Gipson after 13 years at the helm of St. Martin’s. He went on to point out the importance of Gipson’s ministry to his own life.

Then, he turned to advice offered in a phone call from a bishop and former Rector of St. Martin’s. “Russell, let me give you the most helpful advice I received when I came to St. Martin’s. Someone said to me, ‘Don’t worry about trying to fill anyone’s shoes, because you need to bring your own.’” Levenson followed by asking the congregation, “If I can, let me ask you to let me bring my own.”

This summer will see new leadership in schools, school systems, bands, athletic teams, classrooms, and many other activities across our country. Many of us have been in those positions and been uneasy about how we would handle the transition and how well those we lead would accept us. I would encourage anyone who is about to fill some big shoes to listen carefully to Russell Levenson’s words in that first sermon to his congregation. It can be found here. I think it provides a thoughtful approach that bridges the past to the present, and charts the beginnings of a successful course towards the future.

About to fill some big shoes? Don’t try. Instead, bring your own shoes.

“Just” is a Four-Letter Word

Leading With Lollipops and the Art of Leadership