Much of what I read are first-hand accounts of a “new productivity system” which is producing great results. “I have been doing XYZ for the past week, and already I feel much more productive,” is the typical line. “Let’s see how you feel in six months,” is my typical thought. Read on and you will see why.

Indeed, we all need a system in order for us to keep our environments in good order and handle the responsibilities placed on our time. You may have found yourself spinning out of control and feeling as if you are flying by the seat of your pants. At some point in our lives, we have all been there.

We all need a system, one that is comprehensive enough to hold everything we throw at it, yet easy enough we will stick with it.

For me, hitting the brick wall came as a high school senior. I was taking a heavy academic load. As a serious musician, some audition or competition was always looming. College was just around the corner, with all that comes with making that transition. I needed something to help keep “all the ducks in a row.”

That year marked the first time I would adopt a formal “system.” A box of index cards, one for every day, kept my life in order. Any place I needed to be or anything I had planned to do on a particular day was written on the card for that day. Before leaving for school, I would grab that day’s card. I had my marching orders for the day on something that measured a mere 3 x 5.

The back of the card provided a place to trap anything which came up during the day. Homework assignments were jotted on the back of that card. Appointments made for the future were recorded there as well. When I got home, my job was to “clear the card.” In addition to handling the to-dos on the front, my responsibility was also to either do what was written on the back or schedule them for another day, re-copying and cleaning up what I had written onto the appropriate cards. This method served as my introduction to project planning. When the teacher assigned a term paper and announced the due date, I wrote that information on the back of the card. At home, I would break the project down into its individual steps. The due date, as well as all milestones along the way, was entered onto the cards for the days on which they would be done.

That’s where it all started, and the system worked like a charm. From that time forward, I have had a formal, explainable system to guide my days. I was lucky enough to learn at an early age the power of something simple and intentional.

Over the years, however, the nature of that system changed. I would find a perceived shortcoming, junk the system, and come up with something totally new. Sometimes the change would be to a purchased product; other times I adopted a home-made system.

Every time I tried something new, it worked…at least at first. At some point, however, the system would bog down, and it would be time to try something new.

The light-bulb moment came well into adulthood when I realized that every change in “system” had one thing in common. Adopting something new forced me to “clean up” all of the to-dos, plans, goals, and responsibilities to myself and others. The reason the new system worked was because it was clean and clear and allowed me to focus.

I wish I could say I finish my to-do list every day. I don’t. I wish I could say I never accept more input than I can handle. I do, on occasion. But, I never again look for the magic bullet as resting with a new system. The magic happens when I clean up the one I have.

We all need a system, one that is comprehensive enough to hold everything we throw at it, yet easy enough we will stick with it. That system could take the form of a smartphone or a legal pad, a paper planner, or a stack of index cards. The tool isn’t nearly as important as the thoughtful methodology behind how to use it.

“I’ve got to get organized!” is the mantra of many a person as they hit that brick wall. For some, that low point becomes the turning point. When life starts coming at us faster than we can handle it, the answer may not be to look for something new, but rather to start by cleaning up what we have.

What does your productivity system look like? Tell me about it in the comments. 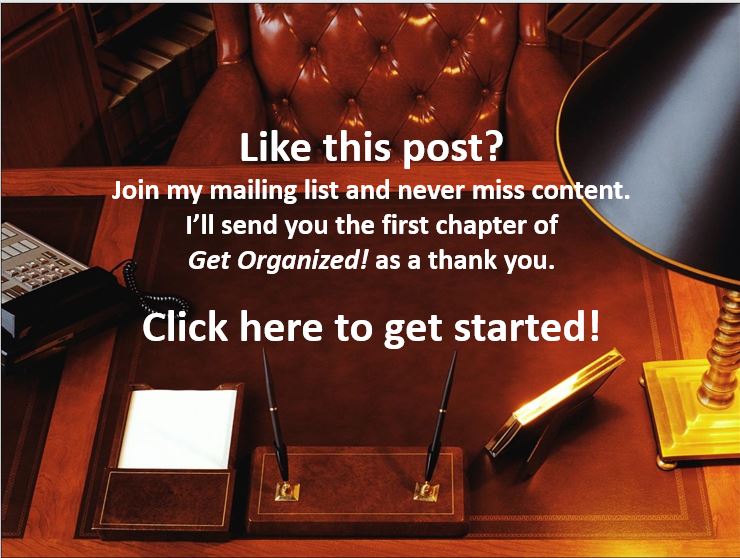 Never Again Forget Where You Hide a Present