For years, I have used a paper journal to record notes from phone calls, one-on-one meetings, group meetings, and workshop sessions I attend. I have discussed that system in both of my books, and outlined how I dissect the “to-dos” from my notes, as well as the system I have to find those notes months or years later.

More and more, I am seeing people who would like to take these types of notes digitally. They take a tablet with them everywhere, and would like to use that tool rather than also having a paper tool.

For a little over a year, I have been experimenting with the digital option that makes sense to me…Evernote. One of my notebooks is called “Journal.” Each phone call is a new note. Each meeting is a new note. Evernote automatically date and time stamps the note. The methodology is the same, whether the tool is paper or digital. Take all notes in one place. Mark to-dos which arise during the course of the note taking with some special mark. Later, review the notes for completeness, and transfer “to-do” items to the to-do list.

TaskClone has received attention from such well-respected people as Steve Dotto and Michael Hyatt. Because it is working well for me, and because you are probably going to at least hear about it, today’s post reviews my experience.

Before you move from a paper system to a digital one for your note talking, think hard along two lines:

Of course, another option is to take notes on paper and then enter a summary of those notes into Evernote. If you are OK with the above two points and want to pursue taking notes digitally, read on.

You can create an account in minutes at TaskClone.com. You will supply several pieces of information: 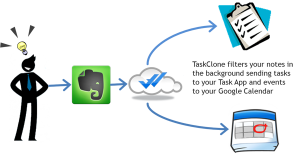 In practice, you would take notes in Evernote. Evernote automatically date-and-time stamps the notes. Give the note a name and take your notes. Some of what you enter will actually be “to-do” items that need to be performed. You will need to enter these items on your to-do list. Failure to do so will result in responsibilities falling through the cracks because they are hidden within notes, but never make their way to the to-do list.

Evernote and TaskClone in action

Each time you find yourself entering something that is not just a piece of information, but is a to-do, precedes the item with a check box. Below is a sample of how a note would look in Evernote.

Any item preceded by the check box and tagged “taskclone” is sent from Evernote though my Gmail account to my digital to-do list.

If I open the note section of this task, I see a link to the original note in Evernote.

The task shows up, worded exactly as in Evernote. In the note section of the task is a link to the original Evernote entry. Therefore, when it’s time to do the task, you are one click away from the notes which led to the creation of that task.

Watch this short video illustrating how the service works.

Another feature of TaskClone is the ability to take an appointment entered in your notes and enter it on your Google Calendar. You use the check box, just as you did with tasks, but add the word Sch a colon, and a space. That combination causes TaskClone to send whatever follows to your Google Calendar .

Entering “Sch: Executive Team Meeting 4/3 3p at Jim’s office” will result in an appointment on the Google Calendar called “Executive Team Meeting” scheduled for April 3 at 3:00 p.m. “Jim’s office” will appear in the location field. Adding email addresses of invitees will trigger  invitations to the meeting. A link to the notes taken in Evernote will appear in the “description” field.

TaskClone offers a free trial. After the trial, the service is extremely reasonable, roughly $15 per year. For those whose jobs involve phone calls and meetings where documentation is important and where dissecting the to-dos from those notes is essential, TaskClone is a winner.

Is anyone using TaskClone already? What are your impressions? If you create an account after reading this post, please come back and leave your thoughts about your experiences. 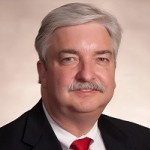 How to Use Evernote to Write a Book

My Hot List of Digital Tools (You’ll Want These)

Evernote Quick Note: What It Is and Why You Need It